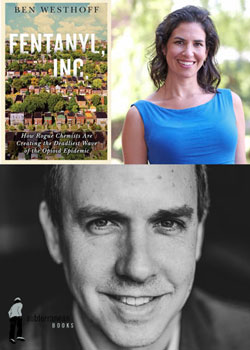 Subterranean Books is pleased to host Ben Westhoff in conversation with Rachel Winograd discussing Westhoff's book Fentanyl, Inc.: How Rogue Chemists Created the Deadliest Wave of the Opioid Epidemic on FACEBOOK LIVE  at 7 PM CDT on Thursday, Sept. 24.  Join us on our Facebook page and order a SIGNED copy of Fentanyl, Inc from Subterranean Books.  Tonight's talk will discuss the impact COVID-19 has had on the fentanyl epidemic, as well as how fentanyl became the deadliest drug in US history, its impact on St. Louis, and Westhoff's infiltration of Chinese drug labs. Your purchase from Subterranean Books helps to support local bookstores and local authors.  Thank you!

Westhoff explores the many-tentacled world of illicit opioids, from the streets of East St. Louis to Chinese pharmaceutical companies, from music festivals deep in the Michigan woods to sanctioned 'shooting up rooms' in Barcelona, in this frank, insightful, and occasionally searing exposé . . . Offers a truly multifaceted view of the landscape of fentanyl use and abuse. The disparate narrative strands he weaves together--including tragic stories of drug users, straightforward analysis of the history of opioid use, tension-filled episodes of drug runs and supplier meet-ups, and the humane and hopeful work of the 'harm reduction' movement--all come together to provide a more complex understanding of the rise of, and response to, the opioid epidemic. Westhoff's well-reported and researched work will likely open eyes, slow knee-jerk responses, and start much needed conversations.--Publishers Weekly

A deeply human story, Fentanyl, Inc. is the first deep-dive investigation of a hazardous and illicit industry that has created a worldwide epidemic, ravaging communities and overwhelming and confounding government agencies that are challenged to combat it. "A whole new crop of chemicals is radically changing the recreational drug landscape," writes Ben Westhoff. "These are known as Novel Psychoactive Substances (NPS) and they include replacements for known drugs like heroin, cocaine, ecstasy, and marijuana. They are synthetic, made in a laboratory, and are much more potent than traditional drugs"--and all-too-often tragically lethal.

Drugs like fentanyl, K2, and Spice--and those with arcane acronyms like 25i-NBOMe-- were all originally conceived in legitimate laboratories for proper scientific and medicinal purposes. Their formulas were then hijacked and manufactured by rogue chemists, largely in China, who change their molecular structures to stay ahead of the law, making the drugs' effects impossible to predict. Westhoff has infiltrated this shadowy world. He tracks down the little-known scientists who invented these drugs and inadvertently killed thousands, as well as a mysterious drug baron who turned the law upside down in his home country of New Zealand. Westhoff visits the shady factories in China from which these drugs emanate, providing startling and original reporting on how China's vast chemical industry operates, and how the Chinese government subsidizes it. Poignantly, he chronicles the lives of addicted users and dealers, families of victims, law enforcement officers, and underground drug awareness organizers in the U.S. and Europe. Together they represent the shocking and riveting full anatomy of a calamity we are just beginning to understand. From its depths, as Westhoff relates, are emerging new strategies that may provide essential long-term solutions to the drug crisis that has affected so many.

Ben Westhoff is an award-winning investigative reporter who writes about culture, drugs, and poverty. His book Fentanyl, Inc.: How Rogue Chemists Created the Deadliest Wave of the Opioid Epidemic is the bombshell first book about the fentanyl epidemic, and he has advised officials at the top levels of government about the crisis. His previous book Original Gangstas is the definitive work on N.W.A., Tupac, and West Coast hip-hop. He came up in the alternative weeklies Riverfront Times and L.A. Weekly and has also written for The Atlantic, The Wall Street Journal, Rolling Stone, and the Guardian.

Rachel Winograd, PhD, is an Associate Research Professor at the University of Missouri St. Louis - Missouri Institute of Mental Health. She received her doctorate in clinical psychology from the University of Missouri, Columbia, and completed her predoctoral internship with the VA St. Louis Healthcare System. Her clinical, research, and program development interests revolve around substance use and the systems designed to address it. She is most committed to expanding access to medical treatment and harm reduction strategies for those most in need of evidence-based care for opioid use disorders.

To participate, log in to your personal Facebook account, go to Subterranean Books' Facebook Page, "Like" the page, and wait for the livestream to begin on the page (you may need to refresh the page periodically until the stream begins).  You can submit questions on our page during the livestream.

Fentanyl, Inc.: How Rogue Chemists Are Creating the Deadliest Wave of the Opioid Epidemic (Paperback)

Fentanyl, Inc.: How Rogue Chemists Are Creating the Deadliest Wave of the Opioid Epidemic (Hardcover)