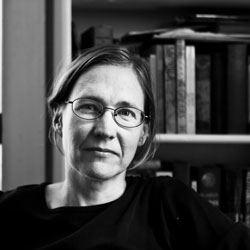 Please join us as we welcome Lisa Jarnot for a lecture and signing with a Q&A facilitated by Devin Johnston of Flood Editions.  This Lisa Jarnot event is presented in partnership with the Bagley Wright Lecture Series on Poetry and Flood Editions.

"Is That A Real Poem Or Did You Just Make It Up?"

In this lecture, the last in a series of five, Lisa Jarnot discusses two book length projects: Some Other Kind of Mission (1994) and A Princess Magic Presto Spell (2019). Inspired by Robert Duncan’s line, "I used to make up my tents, my treasuries, my powers within powers," she asks what it means for the poet to act as prophet in imagining a new heaven and a new earth.

Lisa Jarnot began A Princess Magic Presto Spell after the birth of her daughter, setting the modest goal of writing three words a day. Now a decade-long work-in-progress, these fragments of language are collected into a shorthand chronicle of family life that is intimate and yet open to all the world. Full of nimble transitions and non sequiturs, the poem captures the harrowing joys of parenthood alongside funerals, dentists, divorces, in a give and take between the routine and the extraordinary.

Lisa Jarnot was born in Buffalo, NY and educated at the State University of New York at Buffalo. She is the author of several collections of poetry, including Some Other Kind of Mission (1996), Ring of Fire (2001), Black Dog Songs (2003), Night Scenes (2008), Joie De Vivre: Selected Poems 1992-2012 (2013) and A Princess Magic Presto Spell (2019). She co-edited An Anthology of New (American) Poets (1997), and her biography of San Francisco poet Robert Duncan, The Ambassador from Venus, was published by the University of California Press in 2012. She has been a visiting professor at Naropa University, Brooklyn College, and the University of Colorado, Boulder. She lives in Jackson Heights, Queens, is a Masters of Divinity candidate at New York Theological Seminary and is a minister at Safe Haven United Church of Christ.

The Bagley Wright Lecture Series on Poetry supports contemporary poets as they explore in-depth their own thinking on poetry and poetics, and give a series of lectures resulting from these investigations. Lectures are delivered publicly in partnership with institutions and organizations nationwide. Find out more about past, present, and future lecturers, and explore the archive at www.bagleywrightlectures.org.

This is an in-person event.  Masks are required for all attendees. Copies of Lisa Jarnot's books will be available for purchase and signing at the event, courtesy of Subterranean Books.

Some Other Kind of Mission (Paperback)