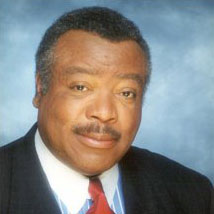 Join the University CIty Pubiic Library for an ONLINE author visit from local TV legend and University City resident Julius Hunter. During this event, Hunter will discuss his new book, Professor Julius K. Hunter’s Stuff You Never Knew About St. Louis History, and share the stories behind his previous books, his long TV career, and his life in St. Louis.

In Professor Julius K. Hunter’s Stuff You Never Knew About St. Louis History you will learn all the funniest and most incredible bits of St. Louis history to fascinate your friends or just for your own enjoyment!

Julius Hunter is an American former journalist and television news anchor, best known for his tenures on two television stations in St. Louis: KSD-TV (now KSDK), the NBC affiliate in St. Louis, and KMOX-TV (now KMOV), the CBS affiliate in St. Louis. He worked as a news reporter and anchorman from 1970 to 2002.  Hunter is the author of seven books that include a children’s alphabet book, a college textbook on broadcast news, and two coffee table books on the great mansions of St. Louis. One is Kingsbury Place: The First Two Hundred Years, and the other is Westmoreland and Portland Places: The History and Architecture of America's Premier Private Streets, 1888-1988. Hunter wrote Honey Island, which traces his family roots back to the birth of his great-great grandfather as a slave born in 1825 in Kentucky. Hunter’s great-great grandfather, Ned Rounds, was a founder of the all-black town of Honey Island, Mississippi, where he became the town’s first banker. His novel Priscilla and Babe: From Slavery's Shackles to Millionaire Bordello Madams in Victorian Saint Louis, was published in 2014. Hunter’s memoir TV One-on-One features transcripts of his historic interviews with five United States Presidents along with behind the scenes stories about many of the celebrity interviews he conducted with Pearl Bailey, Ted Kennedy, Jimmy Hoffa, Sophia Loren, Cab Calloway, Milton Berle, Julia Child, Oprah Winfrey, Bette Midler, Ike Turner, and more.

This online program is free and open to all. Email reference@ucitylibrary.org to receive an email invitation to the Zoom event. The program will also be live-streamed to UCPL’s Facebook page and YouTube channel.

Copies of Professor Julius K. Hunter’s Stuff You Never Knew About St. Louis History will be available for purchase at Subterranean Books