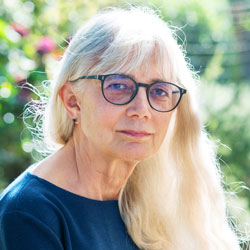 Troost is a real street. East of it is where you can buy a house if you're Black. It's also where our middle-aged white narrator grew up--and where she has just returned to reboot her life. How will she fare in this vastly changed world? This fictional story, punctuated by factual memoir, is by turns soul-searching, entertaining, and heartbreaking.

Under the guise of a starting-over story, East of Troost deals with subtle racism today, overt racism in the past, and soul-searching about what to do about it in everyday living. The novel's fictional narrator has moved back to her childhood home in a neighborhood that is now mostly Black and vastly changed by an expressway that displaced hundreds of families. It is the area located east of Troost Avenue, an invisible barrier created in the early 1900s to keep the west side of Kansas City white, “safely” cordoned off from the Black families on the east side. When the narrator moves back to her old neighborhood in pursuit of a sense of home, she deals with crime, home repair, and skepticism — what is this middle-aged white woman doing here, living alone? Supported by a wise neighbor, a stalwart dog, and the local hardware store, we see her navigate her adult world while we get glimpses of author Ellen Barker’s real life there as a teenager in the sixties, when white families were fleeing and Black families moving in — and sometimes back out when met with hatred and violence. A regional story with universal themes, East of Troost goes to the basics of human behavior: compassion and cruelty, fear and courage, comedy and drama.

Ellen Barker grew up in Kansas City, where she had a front-row seat to the demographic shifts, the hope, and the turmoil of the civil rights era of the 1960s. She has a bachelor's degree in urban studies from Washington University in Saint Louis, where she developed a passion for how cities work, and don't. She began her career as an urban planner in Saint Louis and then spent many years working for large consulting firms specializing in urban infrastructure, first as a tech writer-editor and later managing large data systems. She now lives in Los Altos, California, with her husband and their dog, Boris, who is the inspiration for the German shepherd in East of Troost. This is Ellen's first novel.

Books for signing *must* be purchased from Subterranean Books and are available online or in-store now and on the night of the event.