The LASIK scam: Why your vision is worse again after LASIK surgery and how to improve your vision naturally. A settlement with the eye (Paperback) 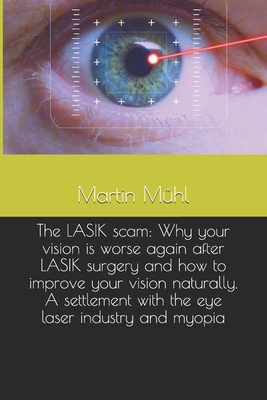 Are you planning to undergo an "eye laser surgery" (called LASIK) or have you already done so? This book explains the dangers and horrors of this industry. The author underwent LASIK surgery himself and still suffers from the consequences today. After extensive research, he realized that he is by far not the only one who was lied to and facts and statistics were concealed. What he found shocked him: Many people have already committed suicide because of their LASIK surgery and the side effects and the problems caused by it. The former president, Dr. Morris Waxler, the American FDA (Food and Drug Administartion), the Food and Drug Administration, the Food and Drug Administration, which released LASIK operations for the public in America in 1999, is now actively campaigning against LASIK. He believes that those responsible at the time lied to him and the FDA about the frequency and severity of the risks of LASIK and is calling for an immediate stop to all operations. To make matters worse, the number of LASIK patients is increasing: well over 40 million people have already undergone LASIK surgery, and about 700,000 more are added each year. Of these people, an increasing majority complain of chronic dry eyes and increasingly poor eyesight. Was the operation worthwhile?