East Africa 1940-1941 (land campaign): The Italian Army Defends The Empire In The Horn Of Africa (Paperback) 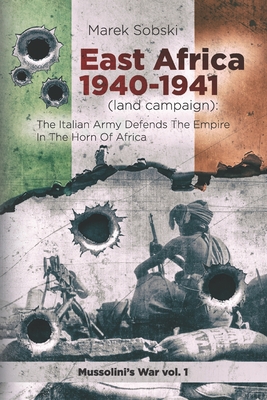 East Africa 1940-1941 (land campaign): The Italian Army Defends The Empire In The Horn Of Africa (Paperback)


Not in stock at store. Will, in most instances, ship from our warehouse in 7-10 days
When the Kingdom of Italy entered the war in Europe in June 1940, it did so only for a moment to hasten the fall of France and force Britain to the peace negotiations table. With each subsequent month it was turning out that the Italians had got involved in a war that was not going to have a quick and victorious end, and the state of their own unpreparedness for the conflict was shocking.

Due to the Italian colonial possessions, the war also spread to East Africa, so distant for Europeans. This is where the situation of the Italian forces turned out to be the most difficult. The troops fighting there, mostly consisting of natives, were disastrously poorly armed, trained only for the purposes of colonial warfare or maintaining internal order in the colonies, cut off from supplies by neighbouring French and British possessions, and the Italian high command lacked the abilities of waging regular campaign. The British Empire, too, began the battle for the Horn of Africa poorly prepared, but quickly realised the importance of this campaign, namely the safety of its own lines of communication across the Red Sea, the Nile and Africa. Having quickly mobilised its forces, it proceeded to eliminate the Italian threat in this part of the world.

This work presents in detail the campaign that lasted until November 1941, in which soldiers of about twenty nationalities from three continents fought on both sides for the colonial interests of Italy and Britain. The campaign in East Africa is not only about the frontline combat, it is also a brutal war between Italians and Ethiopian partisans. We also present issues such as the economic situation of Italian East Africa, the fate of the Italians inhabiting it, the history of the countries that constituted it after the campaign ended, and the Italian underground resistance, whose flame was smouldering up to the very armistice between Italy and the Allies.

The book is illustrated with 81 photos and 17 maps (black & white).

Introduction
I. Italian East Africa
II. Empire Under Siege
III. Unrest Inside Italian East Africa
IV. Italian Troops in East Africa
V. Battle of Kassala and Other Italian Operations On the Border with Sudan
VI. Italian Activity On The Kenya Border, Capture Of Fort Moyale
VII. The Fall Of British Somaliland
VIII. Battle of Gallabat - The First Allied Counteroffensive
IX. End of the Year in the Kenyan Sector
X. Mission 101 Moves To Gojjam
XI. Battle of Agordat
XII. Battle Of Keren
XIII. End Of The Campaign In The North
XIV. The British Invasion On Italian Somali
XV. The Fall Of Addis Ababa
XVI. The Allies Enter Ethiopia
XVII. Emperor Selassie Returns To Addis Ababa
XVIII. Battle Of Amba Alagi
XIX. Campaign In The Province Of Galla And Sidama
XX. The Last Stand: Gondar
XXI. New Orders In The Horn Of Africa
Conclusion
Appendix 1
Italian Ranks and Appointments Used Throughout The Book And Their British Equivalents
Appendix 2
Traditional Ethiopian Appointments
Appendix 3
Biographies Of The High-Ranking Italian Commanders In East Africa
Appendix 4
From "The First Cruiser Tanks" by Peter Brown
Bibliography.