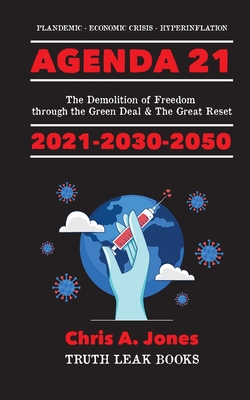 By Truth Leak Books, Chris a Jones (Other)

The Great Reset is 100% certain to fail. We based this conviction on the analytical model of his unique A.I. 'Socrates', which has proven to be astonishingly accurate so many times over for decades. We have a group of elderly people over 80 trying to take over the world and push through this Fourth Industrial Revolution. They are probably hoping for a quick advance in medicine to avoid death. The good news is that this whole attempt to redesign the world and create a future where they become immortal and stay on top will fail.'

'In 2022-2023, according to our models, we will have panic cycles around the world such as have not occurred since the 1930s. Before that there was the period 1917-1923, with revolutions in Russia and Germany. The larger German revolution led to the monarchy, but also to similar revolutions such as the Soviet Republic, the Hungarian Revolution, and the Biennio Rosso revolution in Italy. There were many other smaller uprisings, protests and strikes that resulted from the economic losses of World War I.'

It is hopeful that our future leaders are already coming forward. Young people are also beginning to wake up (not the fake 'woke', which is an extremist extension of old thinking). These are the ones who will soon be allowed to build the real New World; a world where everything that is now 'Big', 'Great' and collectivist will have been definitively settled and where the well-being and maximum development of each individual will finally be central.

Grab your copy, now and read more about the real truth of the current state of affairs