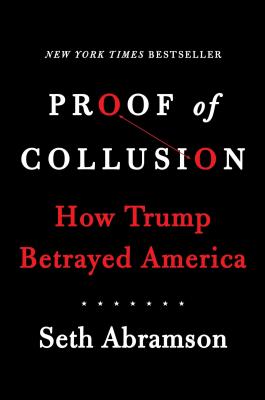 
This title is most likely out of print and an order would not be able to be filled.
For the first time, the full, explosive record of the unthinkable: how a US president compromised American foreign policy in exchange for financial gain and covert election assistance.

Looking back at this moment, historians will ask if Americans knew they were living through the first case of criminal conspiracy between an American presidential candidate turned commander in chief and a geopolitical enemy. The answer might be: it was hard to see the whole picture. The stories coming in from across the globe have often seemed fantastical: clandestine meetings in foreign capitals, secret recordings in a Moscow hotel, Kremlin agents infiltrating the Trump inner circle…

Seth Abramson has tracked every one of these far-flung reports, and now in, Proof of Collusion, he finally gives us a record of the unthinkable—a president compromising American foreign policy in exchange for financial gain and covert election assistance. The attorney, professor, and former criminal investigator has used his exacting legal mind and forensic acumen to compile, organize, and analyze every piece of the Trump-Russia story. His conclusion is clear: the case for collusion is staring us in the face. Drawing from American and European news outlets, he takes readers through the Trump-Russia scandal chronologically, putting the developments in context and showing how they connect. His extraordinary march through all the public evidence includes:

-How Trump worked for thirty years to expand his real estate empire into Russia even as he was rescued from bankruptcy by Putin’s oligarchs, Kremlin agents, and the Russian mafia.

-How Russian intelligence gathered compromising material on him over multiple trips.

-How Trump recruited Russian allies and business partners while running for president.

-How he surrounded himself with advisers who engaged in clandestine negotiations with Russia.

-How Trump aides and family members held secret meetings with foreign agents and lied about them.

By pulling every last thread of this complicated story together, Abramson argues that—even in the absence of a report from Special Counsel Mueller or a thorough Congressional investigation—the public record already confirms a quid pro quo between Trump and the Kremlin. The most extraordinary part of the case for collusion is that so much of it unfolded in plain sight.
Seth Abramson is a former criminal defense attorney and criminal investigator who teaches digital journalism, legal advocacy, and cultural theory at the University of New Hampshire. A regular political and legal analyst on CNN and the BBC during the Trump presidency, he is the author of eight books and editor of five anthologies. Abramson is a graduate of Dartmouth College, Harvard Law School, the Iowa Writers’ Workshop, and the PhD program in English at University of Wisconsin-Madison. He lives in New Hampshire with his wife and two one-year-old rescue hounds, Quinn and Scout. Read more about him at SethAbramson.net.

“A straightforward 400-plus page distillation of the available reporting on the subject to this point… By pulling together the many strands of a dizzyingly complex story, it offers a meticulous cheat sheet to the homework we should all be doing… Abramson has performed a valuable service.”
— Aaron Gell, Medium

“If Proof of Collusion seems woolly, it’s because Trump’s relationship with the Kremlin is damned woolly. As of this writing, not one error has been found in the book.”
— Virginia Heffernan, Playboy Magazine

“[Abramson is] a serious researcher working to test a bold hypothesis... Any future study of Trump and Russia must use his book.”
— New York Journal of Books

“The author minutely examines the many troubling threads to this labyrinthine story… Spirited, thorough, and thunderously foreboding.”
— Kirkus Reviews