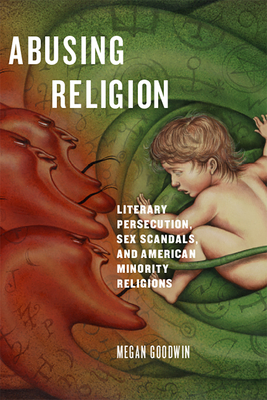 By Megan Goodwin
$34.44
May be on Backorder or may be Out of Print. May take a number of weeks to arrive if it arrives at all. We will confirm.

"Abuse Happens Because We Let It," by Megan Goodwin
https://sojo.net/articles/abuse-happens-because-let-it-Menlo-Park-John-Ortberg-Lavery
— Sojo

"QAnon Didn't Just Spring Forth from the Void—It's the Latest from a Familiar Movement" by Adam Willems - interview with Megan Goodwin
https://religiondispatches.org/qanon-didnt-just-spring-forth-from-the-void-its-the-latest-from-a-familiar-movement/

"The University of Vermont might be done with Religion, but Religion isn't done with us," by Megan Goodwin

"Are you one of the many Revealer readers who appreciated Megan Goodwin’s 'Abusing Religion' series that explored mainstream media portrayals of Mormons, Muslims, and Satanists and their alleged greater prevalence of sexual abuse? If so, you’ll want a copy of her book, Abusing Religion: Literary Persecution, Sex Scandals, and American Minority Religions."
— The Revealer

"Abusing Religion should, and must, initiate long overdue discussion within communities where abuse occurs, but continues outside the spotlight."
— Nova Religio

"In addressing such a fraught, painful, and controversial topic, scholars and students alike would be well served by heeding Goodwin’s persuasive warning."