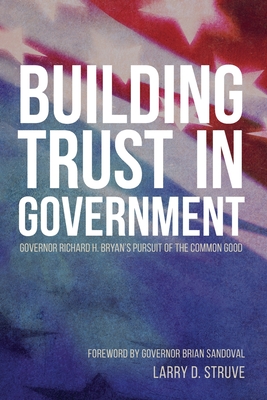 From Larry D. Struve, Director of Commerce during former Nevada Governor Richard H. Bryan's administration (1983-1989) comes this insightful look into Bryan's lasting legacy for the Silver State. In the early 1980s, financial crises within the state and across the nation seriously impacted Nevada's education, senior services, economic development, minority communities, and the preservation of natural resources. By building trust and bridging political boundaries with Republicans, the Democratic governor led his administration to overcome challenges in pursuit of the common good. Struve's anecdotes and analysis highlight how Bryan used humor, intelligence, and ethics to guide his art of governance.

Governor Bryan was born in Washington, D.C. but has lived virtually all of his life in Nevada. A graduate of University of Nevada, Reno, Bryan served as a Second Lieutenant in the U.S. Army before enrolling at the University of California, Hastings College of Law. In 1964, after graduation from law school, he became assistant district attorney for Clark County, Nevada, launching a thirty-six-year career in public service to the people and state of Nevada. From there, Bryan was named Clark County's first Public Defender, then elected as a Democrat to represent the City of Las Vegas in the Nevada State Assembly. After serving two terms in the Nevada Assembly, he was elected to the Nevada State Senate from Clark County, and then served as Nevada Attorney General before being elected governor. After serving as governor, Bryan defeated incumbent Republican Senator Chic Hecht for a seat in the United States Senate. He served two terms in the Senate, retiring at the end of his term in 2001.