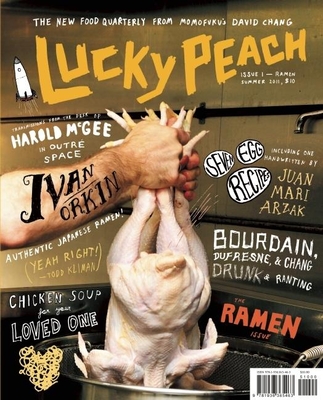 Lucky Peach is a new journal of food writing, published on a quarterly basis by McSweeney's. It is a creation of David Chang, the James Beard Award-winning chef behind the Momofuku restaurants in New York, Momofuku cookbook cowriter Peter Meehan, and Zero Point Zero Productions--producers of the Travel Channel's Emmy Award-winning Anthony Bourdain: No Reservations. The result of this collaboration is a melange of travelogue, essays, art, photography, and rants in a full-color, meticulously designed format. Recipes will defy the tired ingredients-and-numbered-steps formula. They'll be laid out sensibly, inspired by the thought process that went into developing them. Each issue will focus on a theme (Issue One's theme is "Ramen"), with contributions from Harold McGee, Ruth Reichl, John T. Edge, Todd Kliman and a cavalcade of other writers and artists. The reader will meander through arguments about the superiority of yellow alkaline noodles over Italian egg pasta; a taxonomy of ramen-package characters; an eating tour of Japan helmed by an over-stuffed and nauseated, but nevertheless intrepid, David Chang; and a booze-fueled rant on mediocrity in American cuisine with chefs Chang, Bourdain, and Wylie Dufresne set in the Spanish Basque country. The aim of Lucky Peach is to give a platform to a brand of food writing that began with unorthodox authors like Bourdain, resulting in a publication that appeals to diehard foodies as well as fans of good writing and art in general.