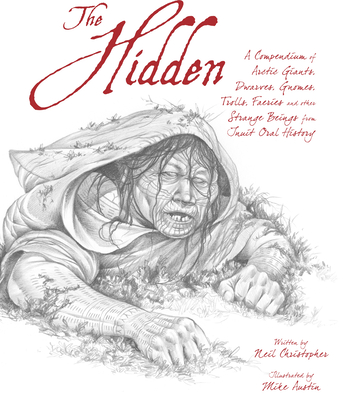 By Neil Christopher, Mike Austin (Illustrator)
Out of Print

Forget fairies and forget vampires! Let yourself be drawn into the dark world of the shape-shifters, ogresses, trolls, and demons of the Canadian Arctic. This collection of field notes meticulously documents the dark side of Inuit legends, complete with hideous monsters and unspeakable deeds. Each creature is brought to life by the stunning illustrations of Mike Austin, a world-renowned tattoo artist. The Hidden exposes the dark beings that lurk in Arctic shadows. This gothic illustrated book is destined to become a collectorís item for any reader interested in dark folklore.

Neil Christopher is an educator, author, and filmmaker. He first moved to the North many years ago to help start a high school program in Resolute Bay, Nunavut. It was those students who first introduced Neil to the mythical inhabitants from Inuit traditional stories. The time spent in Resolute Bay changed the course of Neil’s life. Since that first experience in the Arctic, Nunavut has been the only place he has been able to call home. Neil has worked with many community members to record and preserve traditional Inuit stories. Together with his colleague, Louise Flaherty, and his brother, Danny Christopher, Neil started a small publishing company in Nunavut called Inhabit Media Inc., and has since been working to promote Northern stories and authors.Mike Austin is a leading illustrator and tattoo artist with more than twenty-five years of experience. Mike was first introduced to the Inuit mythology pantheon through the work of Farley Mowat, and he has been transfixed by Northern mythology ever since. Mike strives to tell visual stories with his illustrations—both on paper and skin. His images have appeared in multiple books about Inuit mythology and he has represented Canada at several international tattoo competitions. Mike lives and works in London, Ontario.