Deep Sniff: A History of Poppers and Queer Futures (Paperback) 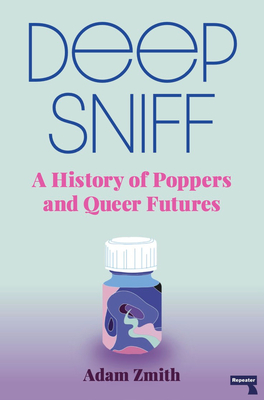 Deep Sniff: A History of Poppers and Queer Futures (Paperback)


Not in stock at store. Will, in most instances, ship from our warehouse in 7-10 days
Adam Zmith reveals the long history of the quick rush from sniffing poppers.

3, 2, 1... inhale, deep. From the Victorian infirmary and the sex clubs of the 1970s, poppers vapour has released the queer potential inside us all.

In Deep Sniff, what starts as a thoughtful enquiry into poppers becomes a manifesto for pleasure.
Adam Zmith is a writer. He was the recipient of the London Writers Award 2019-20, and is the author of several shortlisted and published short stories. He is also one of the producers of The Log Books podcast, winner of Gold in the Best New Podcast category at the British Podcast Awards 2020.

"A pharmacornucopia of sensory pleasures, Adam Zmith’s Deep Sniff is an entire queer curriculum opened up by poppers." - So Mayer, author of A Nazi Word For A Nazi Thing

"Absorbing, riotous, keenly-researched and utterly celebratory, Deep Sniff is exactly the kind of queer history we need right now! Through the heady prism of poppers, Zmith explores the queer body with such curiosity and nuance – and explodes just how very political and ongoing the search for autonomous pleasure really is." - Richard Scott, author of Soho

“A fascinating, joyful social and personal history of an underrated drug. Zmith manages to capture not just the intriguing story of poppers and their role in queer life, but also something of their ineffable chemical pleasure.” - Huw Lemmey, author of Unknown Language

“Adam Zmith's Deep Sniff is a fascinating dive into the history of a common, yet rarely remarked upon part of gay male life in the late 20th and early 20th century: poppers. Deftly intermingling history, personal experience, and cultural commentary, Deep Sniff is a remarkable addition to queer history.” - Hugh Ryan, author of When Brooklyn Was Queer

“A book on poppers and its dilated pleasures is long-overdue. Knowledgeable and naughty, Deep Sniff is a giddy, unashamed rush that doesn’t need to be kept in the fridge after opening.” - Mark Simpson, author of Saint Morrissey, It's a Queer World, Sex Terror, and Male Impersonators