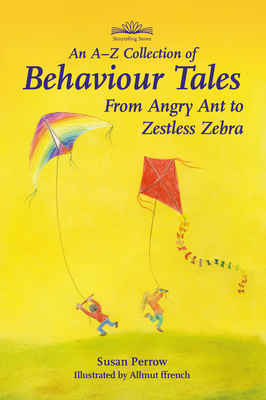 
Not in stock at store. Will, in most instances, ship from our warehouse in 7-10 days
The stories cover many kinds of universal behaviour. Following the alphabet from A to Z, the behaviour is identified in the story title e.g. anxious, bossy, cranky … greedy … jealous … lazy … swearing … uncooperative ... and more
Susan Perrow runs therapeutic storytelling seminars from China to Africa, Europe to America and across her own sun-drenched land of Australia. She is a storyteller, teacher trainer, parent educator and counsellor.
This charming and beautifully illustrated book essentially offers something called “story medicine” as a creative strategy for parenting, teaching and even counselling. The key concept of story medicine or healing stories is that the right story, told at the right time, can unlock something within a child and eventually bring about desired (or much needed) change. One example would be of a child deliberately annoying other children and destroying the peace in the classroom for the whole group. The teacher might then read the story about Obnoxious Octopus so the whole class is presented with a template for solving the problem and behaving or responding differently. The child concerned might now receive positive attention (without having to act annoying to get it) and the other children are inspired to try different ways of behaving around this particular child. When everyone is receptive – the dynamic might just shift! The teacher in me whispers that some stories may well need to be told repeatedly – say every day for a week (or weekly for several months) – but presented in the right way, an improvement may occur given time, given patience and a positive (constructive) attitude. These stories are written for an audience aged 3 – 9 years – but of course they could be used too with another audience (say adults in a teamwork seminar) or adapted for older children. And of course we can do more than just telling: we can create our own picture books, act the stories out with puppets, dolls or teddy bears. We can use them as a starting point for writing and telling our own tales. When my own children were much younger (they are all teenagers now) I remember how I could really get their attention by inserting their names in to stories and adding extra (personal) details that were not in the original story. A portal opened where they were not only listening – they became participants. And often that would come out in their play later. While cooking their dinner I would overhear their teddy bears quoting lines from the story and running wild with the storyline (and many new storylines exploded onto the scene!) A related idea that became very popular in the primary school my own children attended was of making Story Sackis. They would contain book plus toys and props to actually act out the whole story. This is any idea that would work well with this book too. Parents or teachers might get a stuffed octopus (to stay with that example) as well as some toy fishes and involve a group of children in enacting the whole story – first what went wrong and then a much better outcome where everyone is having fun. - - literacytrust.org.uk

As a teacher and mother both I think this book is lovely and based on sound therapeutic and healing principles. The author has really done her research and found positive inspiration in situations where children struggled or something negative occurred. To look within yourself for an innovative way to proceed (as a teacher) is an attitude that can help transform real life situations.On the back cover she is quoted as saying that the stories may not be “magical pills” but they can be a wonderful alternative to nagging or lecturing. Now any parent, teacher or counselor is going to appreciate that!! - Imelda Almqvist -