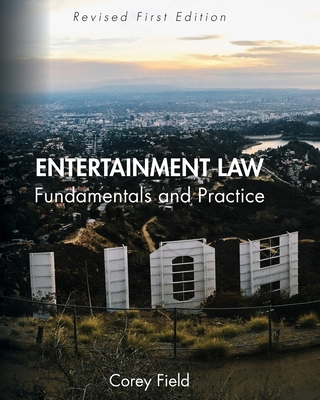 Entertainment Law: Fundamentals and Practice is a comprehensive and unique "how to" guide covering every area of entertainment law including fundamental principles, detailed business models, legal foundations, contract terms, practical advice, and full legal citations for cases and statutes. It has the depth required for practicing lawyers and law students, while at the same time being readable, approachable, and a guidebook for anyone interested in how the entertainment industry works including general courses in the entertainment, film, and music industries.

The key to understanding entertainment law is to understand the underlying business models. The unique broad scope of the book is organized into chapters focusing on film, television, book and magazine publishing, music, live theater, radio, celebrity rights, and cyber law. Within those categories, topics such as agents and managers, licensing, advertising, social media, financing, branding, digital media, new television models, new models in music publishing and recording and digital radio, computer games, and copyright fair use are included.

Developed in recognition of the broad scope of entertainment law and its areas of overlap with contract, corporate, intellectual property, regulatory law, and more, Entertainment Law: Fundamentals and Practice is an excellent resource for both survey courses and breakout courses on film, television, and music law, among others.

Corey Field is a widely regarded entertainment and intellectual property lawyer, legal writer, teacher, and scholar based in Los Angeles. He practices entertainment, media, copyright, and trademark law for worldwide clients in all facets of the entertainment industry. Corey brings to entertainment law a unique background as a professional composer with a doctorate in music and a prior career as an executive in the international music publishing industry before becoming an attorney. He formerly served as the president of The Copyright Society of the U.S.A. and an adjunct professor teaching entertainment and music law at the USC Gould School of Law. Corey currently serves on several entertainment industry boards as well as Outside Counsel for the Sundance Film Festival. Corey often speaks on entertainment law topics worldwide from Los Angeles to New York to Beijing, and is an award-winning legal writer. Formerly with a national law firm on the east coast, he is the founder of Corey Field Law Group, P.C. a boutique entertainment, IP, and media law firm in Los Angeles serving clients worldwide. Corey is a member of the California, New York, and Pennsylvania bars.