Our Southern Highlanders: A History and Narrative of Adventure in the Southern Appalachian Mountains, and a Study of Life Among the Mountaineers (Paperback) 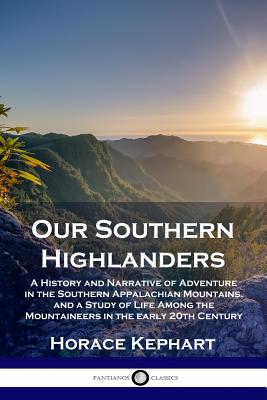 Our Southern Highlanders: A History and Narrative of Adventure in the Southern Appalachian Mountains, and a Study of Life Among the Mountaineers (Paperback)

Travel author Horace Kephart discusses the culture of Appalachia he observed while living in a mountain cabin for several months at the start of the 20th century. This edition contains all of his original photographs.

An honest and eye-opening account of the old Appalachian culture, Our Southern Highlanders attests to rugged yet proud communities well-adapted to the rough terrain. We discover a people who have carved out an existence through sheer grit and persistence; the hardships of mountain life are evident in the worn faces and attire. Though the region is secluded, the inhabitants are by no means cut off - trade is regular, and many locals are descended from Irish, Scots and English immigrants to North America.

Recording conversations and photographing the most noteworthy sights of his stay, Kephart strives to portray the Appalachian region fairly. Although known for his travel writing - a craft usually aimed to encourage and inform potential visitors to a given place - Our Southern Highlanders carries an investigative and journalistic element.

After its release, critics were surprised at how Kephart portrayed the Appalachian way of life in a realistic and honest fashion - in decades prior, the culture had received negative treatment by writers unfamiliar and disaproving. However, Kephart was criticized for focusing overly on the more sensationalist aspects of mountain life - the making of moonshine, for instance, features heavily with stills photographed.