Only in St. Louis! (Paperback) 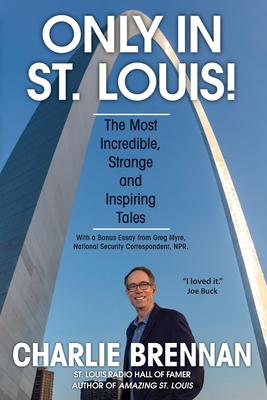 By Charlie Brennan
$24.95
On our shelves now (while supplies last)

In Only in St. Louis , Charlie Brennan shares the most incredible, strange and inspiring stories he has come across in his three decades talking about the Gateway City. Readers will learn:

Wilt Chamberlain was traded in a St. Louis restaurant.

A St. Louis woman woke up when she heard an intruder...who turned out to be a national celebrity.

Why Kurt Warner listed his name and address in the phone book.

The Air Force's biggest weapon is made in St. louis.

The NFL's "lowest blow" has ties to St. Louis.

Twinkies were named in St. Louis.

A lost wallet led to one of the best-selling songs of the 1960s.

The woman who injected John Belushi with a fatal dose hid in St. Louis.

A St. Louis man swam 292 miles of the Mississippi River without stopping.

Why General William Tecumseh Sharman could defeat the south but not City Hall.

The only company to prepare cocaine for medicinal use is in St. Louis.

A man was attacked by a shark in downtown St. Louis.

Brennan, host of "The Charlie Brennan Show" on KMOX and provocateur of "Donnybrook" on KETC-TV, curates these and other stories for the first time in one volume.