Another History of Art (Hardcover) 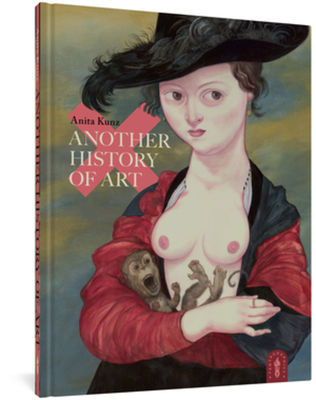 Another History of Art (Hardcover)

Have you ever awakened from a sleepy delirium one morning and imagined that you lived in a different and glorious world where all the recognized masterpieces in the Western pantheon of art history were painted by women? If not, no problem: The renowned and award-winning painter and illustrator Anita Kunz has imagined it for you in her hilariously inventive and masterfully executed Another History of Art. Kunz depicts the most iconic paintings in the history of art — as if they had been painted by women. Conceived with delicious wit, boundless humor, and an eye for the telling aesthetic detail, Kunz’s recreations are not only stunning paintings in their own right but a sly, revisionist social commentary on the male-dominated history of Western civilization.


What would the same paintings everyone is so familiar with look like drawn by Renée Françoise Magritte, Fiona Bacon, Davina Hockney, Leona Da Vinci, Gertrude Klimt, Henrietta Matisse, Francesca Goya, Paola Picasso, Fernanda Victoria Eugenia Delacroix, Wilhelmina Ottilia Dix, and over 50 other artists (let us not forget Vincenza Van Gogh)? Another History is your chance to find out. Included, on each page opposite the painting, is a single paragraph biography of each woman artist.

Another History of Art is a brilliantly satirical, and, yes, feminist, counterfactual history of art conceived, written, and painted by one of our most accomplished contemporary artists.

Anita Kunz is an acclaimed illustrator and painter whose work has graced the covers of the New Yorker, Time, Rolling Stone, The New York Times Magazine, and many other mass circulation periodicals. She was named one of the 50 most influential women in Canada by the National Post. She was the first woman and the first Canadian to have a solo show at the Library of Congress. She has been appointed Officer of the Order of Canada, the country’s highest civilian honor. She lives in Toronto.
A feminist and fantastical vision of art history… [Kunz's] ideas and concepts are as bold as her brush line is graceful.
— The New Yorker

Anita Kunz, illustrator extraordinaire, has had enough of male-dominated art history that is still taught in school, despite shifts in the art landscape. Another History of Art is a compliment, of sorts, to the great historical omnibuses by Sir E. H. Gombrich and H. W. Janson.