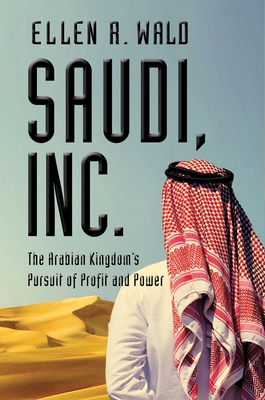 By Ellen R. Wald
Out of Print
A history of the most profitable company in the world, Saudi Aramco, and the story behind the family that ruthlessly maneuvered to control this multi-trillion dollar enterprise.

The Saudi Royal family and Aramco leadership are, and almost always have been, motivated by ambitions of long-term strength and profit. They use Islamic laws, Wahhabi ideology, gender discrimination, and public beheadings to maintain stability and their own power. Underneath the Thebes and abayas and behind the religious fanaticism and illiberalism lies a most sophisticated and ruthless enterprise. Today, that enterprise is poised to pull off the biggest IPO in history.

Over more than a century, fed by ambition and oil wealth, al Saud has come from nothing to rule as absolutely monarchs, a contrast with the world around them and modernity itself. The story starts with Saudi Arabia's founder, Abdul Aziz, a lonely refugee embarking on a daring gambit to recon queer his family's ancestral home—the mud-walled city of Riyadh. It takes readers almost to present day, when the multinational family business has made al Saud the wealthiest family in the world and on the cusp of a new transformation.

Now al Saud and its family business, Aramco, are embarking on their most ambitious move: taking the company public.
Ellen R. Wald, Ph.D. is a widely cited consultant on geopolitics and the global energy industry. A frequent commentator on oil pricing, energy policy, alternative energies, OPEC, and political economy, she earned her doctorate in history at Boston University and an AB in history, Near Eastern Studies, and creative writing at Princeton University. She teaches Middle East history and policy and has appeared on TV and radio on three continents.

"Wald has produced a clear, concise history of both the kingdom and its all-important oil corporation."
— Publishers Weekly

"A solid overview of a nation much in world news and of economic trends that will have significant effects in the global marketplace in years to come."
— Kirkus Reviews

"Well-written and well-researched, Wald’s book is crucial reading for understanding Saudi Arabia as this oil-rich kingdom finds itself in the forefront of fighting Iran’s attempts to control the Middle East and humiliate the US. A timely masterpiece. "
— Steve Forbes

"I can highly recommend it. A really fascinating history of Saudi Aramco."
— Tracy Alloway, Bloomberg

"The U.S.–Saudi relationship is both critically important to both countries and fraught with contradictions. In this incisive and briskly readable study, Ellen Wald skillfully traces the evolution of that relationship from its earliest days down to the present. Saudi, Inc. is an important and timely book."
— Andrew J. Bacevich, author of America's War for the Greater Middle East: A Military History

"Saudi, Inc. should be mandatory reading for anyone planning to do business in Saudi Arabia.  Those of us who have spent years studying the Kingdom are often saddled with the dilemma of explaining its complexity.  Ellen Wald has done a masterful job of taking you inside the boardrooms and the royal chambers, the competing interests and personalities.  She captures the vast scope of history, from the conquest of King Abdul Aziz to the evolution of the business community over the past 80 years.   Wald brings alive the interplay among the al Saud family, the tribes, the religious community and culture, and how they all contributed to the Kingdom’s development.  Those who may think the Saudis were ill equipped to deal with the modern world are likely to walk away rethinking facile assumptions.  Wald chronicles the skill in which the Saudis outmaneuvered everyone, especially the large U.S. corporate enterprises.  A necessary read for all those venturing to the Gulf. "
— Ambassador James B. Smith, ambassador to Saudi Arabia 2009-2013

"A competent history of the Saudi Aramco and of how the House of Saud came to dominate the Arabian Peninsula in the 1920s. Its most original parts deal with the Saudi government’s “long game” to gain full control of Aramco while avoiding outright nationalization."
— Foreign Affairs

"An essential text for anyone who wants to understand the unique history of both Saudi Arabia and Saudi Aramco. Wald has done a tremendous job researching the history of the House of Saud and the evolution of Aramco and provides an in-depth analysis of the people and personalities involved."
— Modern Trader