Not a Nation of Immigrants: Settler Colonialism, White Supremacy, and a History of Erasure and Exclusion (Compact Disc) 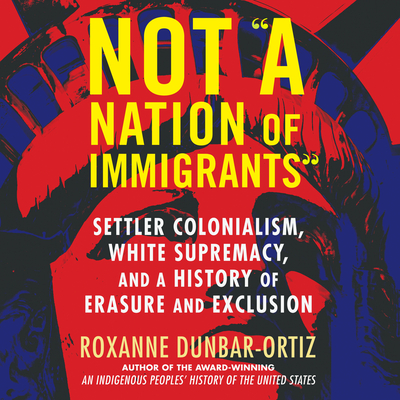 Not a Nation of Immigrants: Settler Colonialism, White Supremacy, and a History of Erasure and Exclusion (Compact Disc)


May be on Backorder or may be Out of Print. May take a number of weeks to arrive if it arrives at all. We will confirm.
Whether in political debates or discussions about immigration around the kitchen table, many Americans, regardless of party affiliation, will say proudly that we are a nation of immigrants. In this bold new book, historian Roxanne Dunbar-Ortiz asserts this ideology is harmful and dishonest because it serves to mask and diminish the US's history of genocide, white supremacy, slavery, and structural inequality, all of which we still grapple with today. She explains that the idea that we are living in a land of opportunity--founded and built by immigrants--was a convenient response by the ruling class and its brain trust to the 1960s demands for decolonization, justice, reparations, and social equality. Moreover, Dunbar-Ortiz charges that this feel good--but inaccurate--story promotes a benign narrative of progress, obscuring that the country was founded in violence as a settler state and has been imperialist since its inception. While some of us are immigrants or descendants of immigrants, others are descendants of those who were here since time immemorial and others are descendants of those who were kidnapped and forced here against their will. This paradigm-shifting book from the highly acclaimed author of An Indigenous Peoples' History of the United States charges that we need to stop believing and perpetuating this simplistic and ahistorical idea and embrace the real (and often horrific) history of the United States.