The Gift: The Form and Reason for Exchange in Archaic Societies (Hardcover) 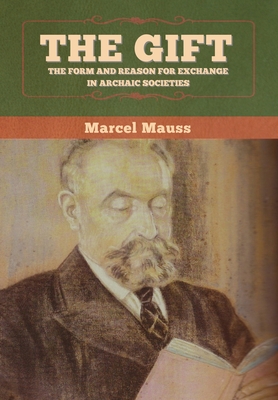 The Gift is a short book by the French sociologist Marcel Mauss that is the foundation of social theories of reciprocity and gift exchange.

Mauss's original piece was entitled Essai sur le don. Forme et raison de l' change dans les soci t's archa ques ("An essay on the gift: the form and reason of exchange in archaic societies") and was originally published in L'Ann e Sociologique in 1925. The essay was later republished in French in 1950 and translated into English in 1954 by Ian Cunnison, in 1990 by W. D. Halls, and in 2016 by Jane I. Guyer.
Mauss's essay focuses on the way that the exchange of objects between groups builds relationships between humans.

It analyzes the economic practices of various so-called archaic societies and finds that they have a common central practice centered on reciprocal exchange. In them, he finds evidence contrary to the presumptions of modern Western societies about the history and nature of exchange. He shows that early exchange systems center around the obligations to give, to receive, and, most importantly, to reciprocate. They occur between groups, not only individuals, and they are a crucial part of "total phenomena" that work to build not just wealth and alliances but social solidarity because "the gift" pervades all aspects of the society. He uses a comparative method, drawing upon published secondary scholarship on peoples from around the world, but especially the Pacific Northwest (especially potlatch).

After examining the reciprocal gift-giving practices of each, he finds in them common features, despite some variation. From the disparate evidence, he builds a case for a foundation to human society based on collective (vs. individual) exchange practices. In so doing, he refutes the English tradition of liberal thought, such as utilitarianism, as distortions of human exchange practices. He concludes by speculating that social welfare programs may be recovering some aspects of the morality of the gift within modern market economies. (wikipedia.org)