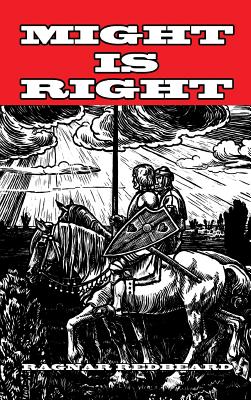 The FULL unedited version. This book, once described as "surely one of the most incendiary works ever to be published anywhere" is a no-holds-barred philosophical venture into the meaning of the Jewish origins of Christianity, of nature over nurture, might over morals, of power over weakness, the right of the strongest to rule, the survival of the fittest and the belief that the world is governed by force, not by religious or moral creeds. It makes Niccol Machiavelli's The Prince pale by comparison.
It is a book which, even a century after its first publication, still stirs huge debate. The reader is likely to be staggered, shake his or her head in agreement, be dumfounded or laugh out loud--even in anguish--from page to page. It is a call to man's primeval instinct of survival, of struggle and of the power of life over death.
"Blessed are the Strong for they shall possess the earth -- Cursed are the weak for they shall inherit the yoke. Blessed are the Powerful for they shall be reverenced among men -- Cursed are the Feeble for they shall be blotted out . . .
"Ethnology, Biology, History, all proclaim Equality to be a myth. Even the great epics of antiquity are all glorifications of inequality: inequality of mind--inequality of birth, of courage or condition. Can equality of body, equality of mind, equality of origin, equality before the law, or any other kind of 'equality' be demonstrated by any one fact?. . .
"You cannot paint the Negro white, with laws and constitutions: though you write it in the fire and smoke of wars and revolutions . . .
"Nineteen centuries of evangelization (with a Hebrew bible as basis) has resulted in -- what? The political, social, financial, and philosophical domination of -- the Hebrew. We study his falsified chronicles, his melancholy literature, and his prophetic outpourings; as if alone, in such a nauseous heap of rubbish and stench the SUMMUM BONUM was to be found."
Fully annotated, with a new introduction.