The Science of Middle-earth: A New Understanding of Tolkien and His World (Hardcover) 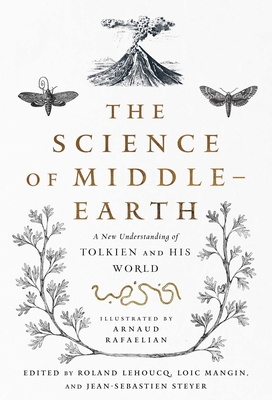 The Science of Middle-earth: A New Understanding of Tolkien and His World (Hardcover)


Not in stock at store. Will, in most instances, ship from our warehouse in 7-10 days
The surprising and illuminating look at how Tolkien's love of science and natural history shaped the creation of his Middle Earth, from its flora and fauna to its landscapes.

The world J.R.R. Tolkien created is one of the most beloved in all of literature, and continues to capture hearts and imaginations around the world.  From Oxford to ComiCon, the Middle Earth is analyzed and interpreted through a multitude of perspectives.

But one essential facet of Tolkien and his Middle Earth has been overlooked: science.  This great writer, creator of worlds and unforgettable character, and inventor of language was also a scientific autodidact, with an innate interest and grasp of botany, paleontologist and geologist, with additional passions for archeology and chemistry.

Tolkien was an acute observer of flora and fauna and mined the minds of his scientific friends about ocean currents and volcanoes.  It is these layers science that give his imaginary universe—and the creatures and characters that inhabit it—such concreteness.  Within this gorgeously illustrated edition, a range of scientists—from astrophysicists to physicians, botanists to volcanologists—explore Tolkien’s novels, poems, and letters to reveal their fascinating scientific roots.

A rewarding combination of literary exploration and scientific discovery, The Science of Middle Earth reveals the hidden meaning of the Ring’s corruption, why Hobbits have big feet, the origins of the Dwarves, the animals which inspired the dragons, and even whether or not an Ent is possible.

Enhanced by superb original drawings, this transportive work will delight both Tolkien fans and science lovers and inspire us to view both Middle Earth—and our own world—with fresh eyes.
Arnaud Rafaelian is an artist who lives in Paris, France.

Roland Lehoucq is an astrophysicist at the French Atomic Energy Commission (CEA). He writes for the science fiction journal Bifrost and sponsors primary school classes to familiarize children with science.

Loïc Mangin is the associate editor of Pour la Science where he is also "Art & Science" columnist. He wrote Pollock, Turner, Van Gogh, Vermeer and science.

Jean-Sébastien Steyer is a paleontologist at the Centre National de la Recherche Scientifique and the National Museum of Natural History in Paris. He is the winner of the Paul Sangnier Prize and the Van Straelen Prize and a columnist in Pour La Science.
"Any fan, casual or academic, of Tolkien’s work will find this book entertaining and informative. Highly recommended."
— Library Journal (Starred)

"Tolkien’s Middle Earth might be an imaginary world, but it was created by a master with a deep understanding of science. In this fun and whimsical book, leading scientists and Tolkien enthusiasts blend their passions to reveal the secrets of Middle Earth—from the anatomical reasons hobbits have big and hairy feet to the chemistry of the Ring. A new perspective on some of our most treasured stories, this book is a perfect companion to any of Tolkien’s works, or the films based on them."
— Steve Brusatte, professor and paleontologist at the University of Edinburgh and New York Times/Sunday Times bestselling author of The Rise and Fall of the Dinosaurs