Did Muhammad Exist?: An Inquiry into Islam's Obscure Origins—Revised and Expanded Edition (Hardcover) 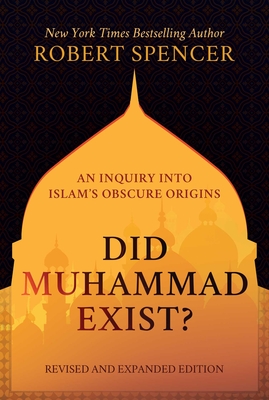 Did Muhammad Exist?: An Inquiry into Islam's Obscure Origins—Revised and Expanded Edition (Hardcover)


Not in stock at store. Will, in most instances, ship from our warehouse in 7-10 days
Are jihadis dying for a fiction? Everything you thought you knew about Islam is about to change.

Is there any sound historical evidence that the prophet of Islam actually existed, or is the entire story of Muhammad fable or fiction?

It is a question that few have thought—or dared—to ask. Virtually everyone, Muslim and non-Muslim alike, takes for granted that the prophet of Islam lived as a prophet, as well as a political and military leader, in seventh-century Arabia.

But this widely accepted story begins to crumble on close examination. In his blockbuster New York Times bestseller The Truth about Muhammad, historian and Islam expert Robert Spencer revealed the often shocking contents of Islamic teachings about Muhammad. Now, in this newly revised and expanded version of Did Muhammad Exist?, he lays bare those teachings’ surprisingly shaky historical foundations.

This updated and enlarged version of this acclaimed book examines even more striking and compelling evidence that the story of Muhammad, who for so long was assumed to have lived in the “full light of history,” could be more myth and legend than historical fact.

Spencer meticulously examines historical records and archaeological findings, pioneering new scholarship to reconstruct what we can know about Muhammad, the Qur’an, and the early days of Islam. The evidence he presents challenges the most fundamental assumptions about Islam’s origins.
Spencer is the bestselling author of The History of Jihad, The Palestinian Delusion, and Did Muhammad Exist?. He led seminars for the FBI, the US Central Command, US Army Command and General Staff College, the Asymmetric Warfare Group, and the Joint Terrorism Task Force (JTTF).