Wasteland: The Great War and the Origins of Modern Horror (Hardcover) 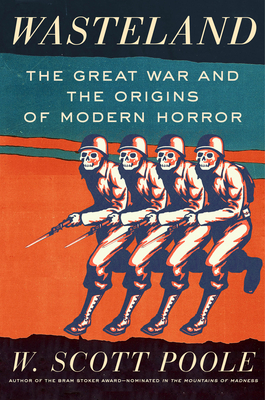 From Nosferatu to Frankenstein's monster, from Fritz Lang to James Whale, the touchstones of horror can all trace their roots to the bloodshed of the First World War. Bram Stoker Award nominee W. Scott Poole traces the confluence of military history, technology, and art in the wake of World War I to show how overwhelming carnage gave birth to a wholly new art form: modern horror films and literature.

"Thoroughly engrossing cultural study . . . Poole persuasively argues that the birth of horror as a genre is rooted in the unprecedented destruction and carnage of WWI." --Publishers Weekly (starred review)

W. SCOTT POOLE is a professor of history at the College of Charleston who teaches and writes about horror and popular culture. His past books include the award-winning Monsters in America and the biography Vampira: Dark Goddess of Horror. He is a Bram Stoker Award nominee for his critically acclaimed biography of H. P. Lovecraft, In the Mountains of Madness.