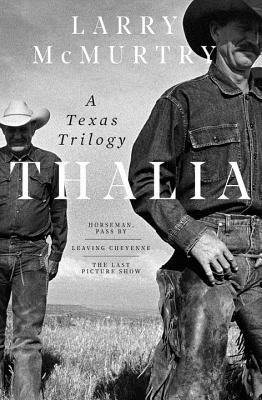 By Larry McMurtry
$29.95
Not in stock at store. Will, in most instances, ship from our warehouse in 7-10 days

One of Entertainment Weekly’s "Most Beautiful Books of the Year"

The renaissance of Larry McMurtry, “an alchemist who converts the basest materials to gold” (New York Times Book Review), continues with the publication of Thalia.

Larry McMurtry burst onto the American literary scene with a force that would forever redefine how we perceive the American West. His first three novels— Horseman, Pass By (1961),* Leaving Cheyenne (1963), and The Last Picture Show (1966)— all set in the north Texas town of Thalia after World War II, are collected here for the first time. In this trilogy, McMurtry writes tragically of men and women trying to carve out an existence on the plains, where the forces of modernity challenge small- town American life. From a cattleranch rivalry that confirms McMurtry’s “full- blooded Western genius” (Publishers Weekly) to a love triangle involving a cowboy, his rancher boss and wife, and finally to the hardscrabble citizens of an oil- patch town trying to keep their only movie house alive, McMurtry captures the stark realities of the West like no one else. With a new introduction, Thalia emerges as an American classic that celebrates one of our greatest literary masters.

*Just named in 2017 by Publishers Weekly the #1 Western novel worthy of rediscovery.

Larry McMurtry is an award-winning novelist, essayist, and avid bookseller and collector, who won an Academy Award for the screenplay of Brokeback Mountain with cowriter Diana Ossana. Awarded in 2014 the National Humanities Medal for his body of work, his novels include Lonesome Dove and, most recently, The Last Kind Words Saloon. He lives in Archer City, Texas.

It’s good to see them all together . . . . These novels are three independent attempts to portray that world and what was left in the wake of its passing. Each one is better than the last. . . Among the many pleasures in reading Thalia is observing Mr. McMurtry’s gathering power as a novelist.

These three McMurtry novels rode over the tired clichés of post-Wister cowboy mythology with iron hooves. They revolutionized hero-heavy western literature. Here were characters plagued by bad love affairs, cranky kitchen stoves, infected by sibling rivalries, coming up against obstinate horses and pain-in-the-ass fathers, whitewashing sexual jealousies with rotten deeds of cheating and lying. Yet the stories showed an undercoating of rust-proof decency that sometimes let an offender face up to himself.
— Annie Proulx, Pulitzer Prize–winning author of The Shipping News