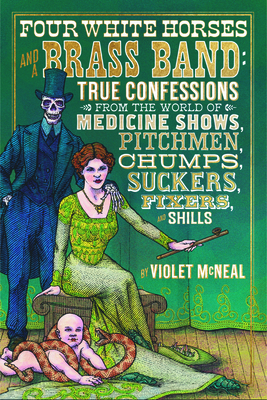 
Not in stock at store. Will, in most instances, ship from our warehouse in 7-10 days
Violet McNeal ran away from her family's rural Minnesota farm in the late 1880s and fell under the spell of conman and patent medicine "doctor" Will Archimbauld who hooked her on opium and promises of fame and fortune. Violet soon learned to become Princess Lotus Blossom and was the best pitchman, nostrum seller, and conwoman to roam the west in a torch-lit wagon. Four White Horses and a Brass Band is Violet's story of life on the road with the medicine show and reveal the secrets of conman's trade. Sick and nearly dead with addiction by age 30, she submits to the tortures of withdrawal and the "cure" to create a new life. First published in 1947, the Feral House edition features an extensive afterword on the history of the patent medicine trade and evolution of the lure of miracle cures and healers. Also included are a glossary of the grifter's cant and samples of scripts used by Violet and other infamous "doctors".
Violet McNeal was a teenage runaway who gained fame on the medicine show circuit of the late 1800s through the early 20th Century. She left her abusive partner, quit opium, married and settled in Oregon and later California. She penned her autobiography which was originally released in 1947.