Quincredible Vol. 1: Quest to be the Best (Paperback) 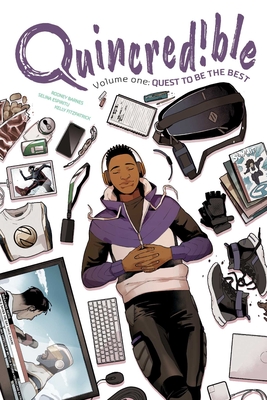 Quincredible Vol. 1: Quest to be the Best (Paperback)


On our shelves now (while supplies last)
"Quincredible gets literally everything right." — Comics Beat

Invulnerability is a pretty useless superpower if you’ve only got a one-hundred-pound frame to back it up. That’s what Quinton West’s life became when he went from “small guy who got beat up” to “small guy who can’t get hurt” after the meteor shower dubbed “The Event” gifted him the power of invulnerability, but no other powers to compliment it.

But there’s more to Quin than meets the eye, and after some encouragement from his new mentor—a local New Orleans–based superhero named Glow—Quin realizes that he can use his quirky hobby of creating Rube Goldberg devices to outsmart the opposition. But being a hero paints a target on your back, and Quin’s got to risk it all to join the ranks of the superheroes he looks up to. It’s a good thing he can take a punch.
Rodney Barnes is the award-winning writer/producer of HBO's Showtime, Hulu's Wu-Tang: An American Saga, Marvel's Runaways, Starz's American Gods, and a host of other television programs and films. He has also authored graphic novels for Lion Forge's Quincredible and Star Wars - Lando: Double or Nothing, as well as Falcon for Marvel Comics. He is now writing Killadelphia for Image Comics. Rodney resides in Los Angeles.

Selina Espiritu is a freelance illustrator working from the Philippines with an enthusiasm for dogs and storytelling. She has worked on titles such as QUINCREDIBLE, published by Lion Forge, and BRAVE CHEF BRIANNA, by BOOM! Studios. Outside of comics, Espiritu's freelance work revolves around cover illustration and character design, for which she possesses a particular passion for. Otherwise, she amuses herself with her dogs, history books, and her work as an emergency medical technician.

Kelly Fitzpatrick was born in San Antonio, Texas, in the spring of 1988. Received a BFA in Illustration/ minor in Photography and Digital Imaging from the Ringling College of Art and Design in Sarasota, Florida, in 2010. Kelly Fitzpatrick has been awarded and nominated for various awards for her work on Bitch Planet, DC Bombshells, and was recognized as one of the best colorists of 2014 by ComicBook.com.
"A fun, fresh adventure."
— Kirkus

"The creative team has clearly poured their heart and soul into the title."
— Black Nerd Problems

"[Quincredible] is a well-rounded work, with complex characterizations and a good story that understands that these aspects aren’t separate from the political and social ones, but intertwined, bouncing off each other and fashioning a reality from all these factors."
— Comics Beat

"Quincredible is thoughtful, open-minded, and, most of all, fun."
— Foreword Reviews

"A perfect starting point for teens (and adults) looking to enter a fresh superhero universe."
— Booklist