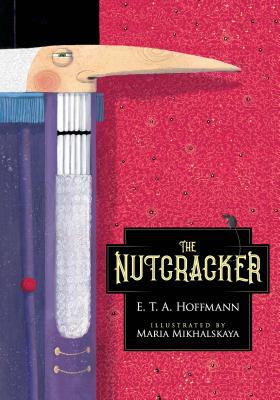 By E. T. a. Hoffmann, Maria Mikhalskaya (Illustrator)
$25.00
Not in stock at store. Will, in most instances, ship from our warehouse in 7-10 days

Readers of all ages will be enchanted by this gloriously illustrated edition of a beloved holiday fable. Award-winning Russian artist Maria Mikhalskaya's phantasmagorical images recapture the spirit of E. T. A. Hoffmann's 1816 fairy tale, which served as the basis for Tchaikovsky's musical interpretation. The popular ballet, set to the Russian composer's irresistible score, adds a veneer of kitsch and cuteness. But the original, less-familiar drama, however, possesses elements of a stranger, darker, more intriguing nature. Like a Russian nesting doll, the narrative tells a story inside of a story inside of yet another story.
Hoffmann, who excelled in exploring the boundaries between fantasy and reality, drew upon the magic of Christmas to lend imaginative sparkle to the adventures of a little girl who falls in love with a nutcracker doll. A seven-headed mouse king and his army of mice, a mysterious godfather, and a vengeful rodent mother add spice to the holiday treat. This deluxe heirloom edition offers the chance to make an old tale into a new seasonal tradition.

Ernst Theodor Amadeus Hoffmann (1776-1822) replaced his third name, Wilhelm, with Amadeus in homage to Mozart. A towering figure of German Romanticism, Hoffmann was a composer, music critic, theater director, draftsman, and caricaturist as well as a writer. Although his stories challenged readers to free their minds from the conventions of reality, Hoffmann accepted the practical constraints of everyday life, training as a lawyer and serving as a judge. Maria Mikhalskaya attended the Moscow University of Printing Arts, creating her illustrations for The Nutcracker as her graduate project. Her many awards from international illustration contests include the Grand Prix of the Student Festival of the Social Advertisement (Moscow, 2005), third place at the 2008 Croatian Biennale of Illustration, the C. J. Picture Book Award at the 2010 Picture Book Festival in South Korea, and first place at the 2010 Moscow "Art Story" illustration contest. She is also a four-time winner of the Moscow contest The Book Image.