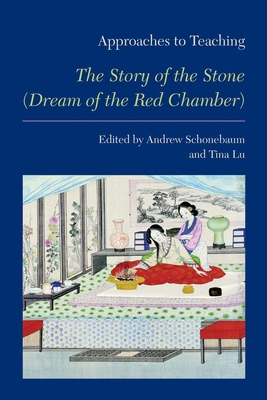 By Andrew Schonebaum (Editor), Tina Lu (Editor)
$34.80
Not in stock at store. Will, in most instances, ship from our warehouse in 7-10 days

The Story of the Stone (or Dream of the Red Chamber), a Chinese novel by Cao Xueqin and continued by Gao E, tells of an amazing garden, of a young man's choice between two beautiful women, of his journey toward enlightenment, and of the moral and financial decline of a powerful family. Published in 1792, it depicts virtually every facet of life in eighteenth-century China--and has influenced culture in China ever since.

Part 1 of this volume, "Materials," provides information and resources that will help teachers and students begin and pursue their study of Stone. The essays that constitute part 2, "Approaches," introduce major topics to be covered in the classroom: Chinese religion, medicine, history, traditions of poetry, material culture, sexual mores, servants; Stone in film and on television; and the formidable challenges of translation into English that were faced by David Hawkes and then by John Minford.

Andrew Schonebaum is an assistant professor of Chinese literature at the University of Maryland. He has published articles and book chapters on medicine and science in the Chinese novel. Tina Lu is professor of Chinese literature at Yale University. She is the author of Persons, Roles, and Minds: Identity inPeony Pavilion andPeach Blossom Fan and Accidental Incest, Filial Cannibalism, and Other Peculiar Encounters in Late Imperial Literature.