Assassinations: The Plots, Politics, and Powers Behind History-Changing Murders (Paperback) 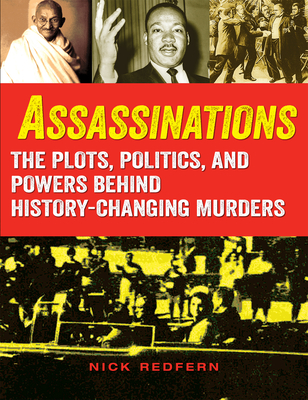 By Nick Redfern
$19.95
Not in stock at store. Will, in most instances, ship from our warehouse in 7-10 days

A deep dive into high stakes killings, conspiracies and crimes

Ruthless killers and murderers for hire: they are here, there, and everywhere. They lurk in the shadows, ready to pounce. They terminate on command. And, in the process, they change the course of the world. They are among the world's most cold-hearted, deadly, and emotionless figures. They are assassins, and they have a long history of grievous deeds.

From the cunning, calculating, government-trained warriors to the psychopathic, homegrown freelancers, you can find them all in Assassinations: The Plots, Politics, and Powers behind History-changing Murders. Exposed are the hidden agendas as well as the open warfare. The cynical preparations and devastating aftermaths are laid bare. You will quickly find yourself immersed in a world that is filled with killings made to seem like suicides, murders that were designed to look like heart attacks or overdoses, and accidents that, in reality, were carefully orchestrated deaths.

Did Lee Harvey Oswald really kill JFK? Or was Oswald the patsy he claimed to be? Was Jack the Ripper, who terrified London in 1888, a madman or a ruthless secret agent of the British government? Did the United States' first secretary of defense, James Forrestal, kill himself, or was he thrown out of a window to his death in May 1949? Did Marilyn Monroe take her own life in August 1962? Was a contract put out on her? What led to the demise of Danny Casolaro, an investigative journalist who, at the time of his death in 1991, was investigating a powerful cabal known as "The Octopus"? Was Diana, Princess of Wales, the victim of a car accident or of a carefully orchestrated plot? Can sound waves and microwaves kill people at the flick of a switch? Was John Lennon's murder not at all what it appeared to be?

These questions and many more are answered in Assassinations, and with more than 120 photos and graphics, this tome is richly illustrated. Its helpful bibliography and extensive index add to its usefulness. It's a fascinating read that looks into how and why so many famous and influential figures just had to go.

Nick Redfern works full time as an author, lecturer, and journalist. He writes about a wide range of unsolved mysteries, including UFOs, alien encounters, government conspiracies, Bigfoot, and the Loch Ness Monster. His many books include Visible Ink Press' The Bigfoot Book: The Encyclopedia of Sasquatch, Yeti, and Cryptid Primates; Area 51: The Revealing Truth of UFOs, Secret Aircraft, Cover-Ups & Conspiracies; The Alien Book: A Guide to Extraterrestrial Beings on Earth; Secret History: Conspiracies from Ancient Aliens to the New World Order; Cover-Ups & Secrets: The Complete Guide to Government Conspiracies, Manipulations & Deceptions; Control: MKUltra, Chemtrails and the Conspiracy to Suppress the Masses; Secret Societies: The Complete Guide to Histories, Rites, and Rituals; and The Monster Book: Creatures, Beasts, and Fiends of Nature. He has appeared on numerous television shows, including History Channel's Monster Quest and UFO Hunters; VH1's Legend Hunters; National Geographic Channel's The Truth about UFOs and Paranatural; the BBC's Out of this World; MSNBC's Countdown; and SyFy Channel's Proof Positive. Nick lives just a few miles from Dallas, Texas' infamous Grassy Knoll.