Jane Savoie's Dressage 101: The Ultimate Source of Dressage Basics in a Language You Can Understand (Paperback) 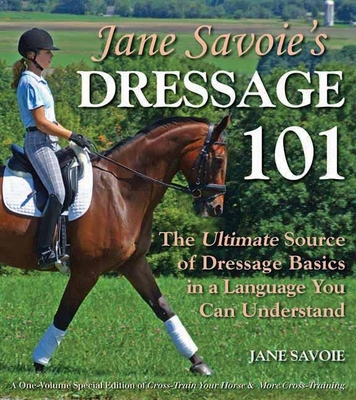 Jane Savoie's Dressage 101: The Ultimate Source of Dressage Basics in a Language You Can Understand (Paperback)

It's a simple, riddle-free system of training that places a high priority on the horse's physical and mental well-being. Beginning with the three golden rules of dressage training--clarity, consistency, and kindness--Jane Savoie walks you through her four stages of dressage education.

Stage One is an introductory course in the basics, and Stage Two covers the nuts and bolts of training, including transitions, school figures, and movements.

By the time you finish Stage Two, you'll have a happy, responsive horse that understands going forward and being straight; accepts contact so you can communicate with him through the reins; moves in a regular rhythm and a steady tempo in all three gaits; and can do transitions, circles, and turns, back up, lengthen his stride, and go sideways.

In Stage Three, Jane translates the secrets surrounding the half-halt, enabling you to put your horse on the bit, and adding a whole new dimension to your training. You'll even be ready for some fancy stuff in Stage Four.

Don't worry, everything in this book is well within the capacity of most horses. We're simply talking about the work required in the United States Equestrian Federation's (USEF) dressage tests up to Third Level, which concludes with collected, medium, and extended gaits; advanced lateral movements; and flying changes.

Jane Savoie is one of the most recognized names in the equine industry and for good reason. Her accomplishments and the breadth of her influence are impressive. As a dressage rider, she was a member of the United States Equestrian Team, competing internationally, including a position as the reserve rider for the bronze-medal-winning team at the 1992 Olympics. Savoie was the dressage coach for the Canadian 3-Day Event Team at the 1996 and 2004 Olympics, and coached a number of dressage and event riders at the 2000 Olympics. She is the author of many bestselling books and video programs on riding, training, and sport psychology, and is a popular motivational speaker. Savoie splits her time between Vermont and Florida.

"This massive book doesn't merely provide tips for success, but rather a whole plan for how to develop your dressage skills and your horse's performance from beginning to end." Horsemen's Yankee Pedlar (August 30, 2011)

"Clear and concise, Dressage 101 gives you the basic tools to communicate with your horse and develop his body and movements. Whether you plan to continue your dressage schooling or you're heading for the nearest hunter ring or cross-country course, the book will help you and your horse get there with grace, beauty and athleticism." Practical Horseman