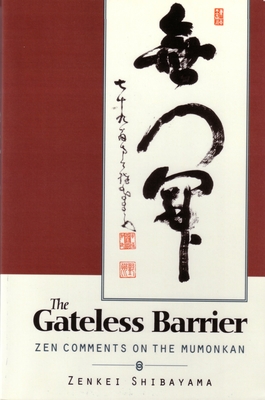 By Zenkai Shibayama
$29.95
Not in stock at store. Will, in most instances, ship from our warehouse in 7-10 days

For more than seven centuries the Mumonkan has been used in Zen monasteries to train monks and to encourage the religious development of lay Buddhists. It contains forty- eight koans, or spiritual riddles, that must be explored during the course of Zen training. Shibayama Zenkei (1894-1974), an influential Japanese Zen teacher and calligrapher who traveled and lectured throughout the United States in the 60s and 70s, offers his own commentary alongside the classic text. The Gateless Barrier remains an essential text for all serious students of Buddhism.

Born in 1894 and ordained a Zen monk in 1908, Zenkei Shibayama was Zen Master of the important Nanzenji Zen Monastery in Kyoto for twenty-five years. He was a professor at Hanazono and Otani universities, the author of a number of works in Japanese, and the chief abbot of the Nanzenji Organization of some five hundred Rinzai Zen temples in Japan. Shibayama Roshi died in 1974.