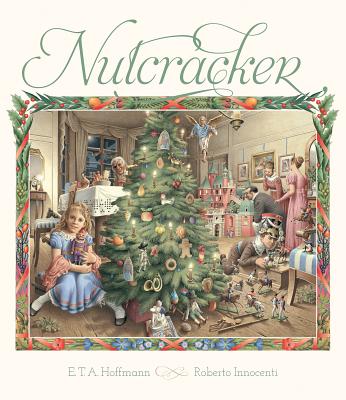 By E.T.A. Hoffmann, Roberto Innocenti (Illustrator)
$29.99
Special Order, May be Out of Print

A Christmas Eve tradition becomes a saga of epic proportions when young Marie Stahlbaum's beloved Nutcracker defends her against the dreaded Mouse King's army. As Marie recovers after the battle, Godfather Drosselmeier relates Nutcracker's sad tale, and the compassionate girl sees the truth behind the toy-like veneer. This unabridged edition of Hoffmann's classic, The Nutcracker and the Mouse King, is artfully illustrated by Roberto Innocenti and reissued for a new generation of storytellers and listeners.

E. T. A. Hoffmann (1776–1822) was a German author, artist, composer, and eccentric. His stories were known for their fantastical elements. Three of his tales served as the basis of Offenbach's opera Tales of Hoffmann. His most well-known work, though, was this Christmastime story from 1816, which inspired the famous ballet by Russian composer Pyotr Tchaikovsky.

Roberto Innocenti is a self-taught artist who has earned worldwide acclaim with such illustrated books as The House, Rose Blanche, Erika's Story, The Adventures of Pinocchio, and The Girl in Red. In 2008, he was awarded the prestigious Hans Christian Andersen Award for his contributions to children's literature. He lives in Florence, Italy.