The Bastard Brigade: The True Story of the Renegade Scientists and Spies Who Sabotaged the Nazi Atomic Bomb (Compact Disc) 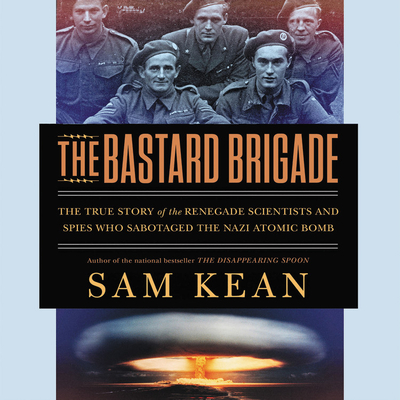 From New York Times bestselling author Sam Kean comes the gripping, untold story of a renegade group of scientists and spies determined to keep Adolf Hitler from obtaining the ultimate prize: a nuclear bombScientists have always kept secrets. But rarely have the secrets been as vital as they were during World War II. In the middle of building an atomic bomb, the leaders of the Manhattan Project were alarmed to learn that Nazi Germany was far outpacing the Allies in nuclear weapons research. Hitler, with just a few pounds of uranium, would have the capability to reverse the entire D-Day operation and conquer Europe. So they assembled a rough and motley crew of geniuses - dubbed the Alsos Mission - and sent them careening into Axis territory to spy on, sabotage, and even assassinate members of Nazi Germany's feared Uranium Club. The details of the mission rival the finest spy thriller, but what makes this story sing is the incredible cast of characters-both heroes and rogues alike-including: Moe Berg the major league catcher who abandoned the game for a career as a multilingual international spy; the strangest fellow to ever play professional baseball.Werner Heisenberg the Nobel Prize-winning physicist credited as the discoverer of quantum mechanics; a key contributor to the Nazi's atomic bomb project and the primary target of the Alsos mission. Colonel Boris Pash a high school science teacher and veteran of the Russian Revolution who fled the Sovit Union with a deep disdain for Communists and who later led the Alsos mission. Joe Kennedy Jr. the charismatic, thrill-seeking older brother of JFK whose need for adventure led him to volunteer for the most dangerous missions the Navy had to offer. Samuel Goudsmit a washed-up physics prodigy who spent his life huntinh Nazi scientist-and his parents, who had been swept into a concentration camp-across the globe. Ir ne and Frederic Joliot-Curie a physics Nobel-Prize winning power couple who used their unassuming status as scientists to become active members of the resistance. Thrust into the dark world of international espionage, these scientists and soldiers played a vital and largely untold role in turning back one of the darkest tides in human history.