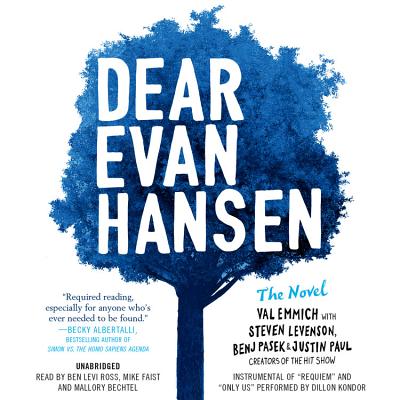 
May be on Backorder or may be Out of Print. May take a number of weeks to arrive if it arrives at all. We will confirm.
From the show's creators comes the groundbreaking, bestselling novel inspired by the hit Broadway show Dear Evan Hansen.

Today's going to be an amazing day and here's why...

When a letter that was never meant to be seen by anyone draws high school senior Evan Hansen into a family's griefover the loss of their son, he is given the chance of a lifetime: to belong. He just has to stick to a lie he never meant to tell, that the notoriously troubled Connor Murphy was his secret best friend.

Suddenly, Evan isn't invisible anymore--even to the girl of his dreams. And Connor Murphy's parents, with their beautiful home on the other side of town, have taken him in like he was their own, desperate to know more about their enigmatic son from his closest friend.As Evan gets pulled deeper into their swirl of anger, regret, and confusion, he knows that what he's doing can't be right, but if he's helping people, how wrong can it be?

No longer tangled in his once-incapacitating anxiety, this new Evan has a purpose. And a website. He's confident. He's a viral phenomenon. Every day is amazing. Until everything is in danger of unraveling and he comes face to face with his greatest obstacle: himself.

A simple lie leads to complicated truths in this big-hearted coming-of-age story of grief, authenticity and the struggle to belong in an age of instant connectivity and profound isolation.
Val Emmich is a writer, singer-songwriter, and actor. He has had recurring roles on Vinyl and Ugly Betty as well as a memorable guest role as Liz Lemon's coffee-boy fling, Jamie, on 30 Rock. His debut novel, The Reminders, was a B&N Discover selection that Library Journal called "quirky, touching and addictive."

Steven Levenson is the Tony Award-winning playwright of Dear Evan Hansen. Other plays include Days of Rage, If I Forget, The Unavoidable Disappearance of Tom Durnin, and The Language of Trees. In television, he was a writer and producer on Showtime's Masters of Sex and co-creator of the limited series Fosse/Verdon (FX). Upcoming film projects include the adaptation of Jonathan Larson's tick, tick...boom!

Benj Pasek and Justin Paul are the Oscar, Grammy, Tony, and Golden Globe-winning songwriting team behind the Broadway musicals Dear Evan Hansen and A Christmas Story, The Musical. Their film projects include: The Greatest Showman, La La Land,Trolls, and Aladdin as well as the upcoming live action musical Snow White and original animated musical Foster.

Even in book form, Evan Hansen's story sings. Required reading, especially for anyone who's ever needed to be found.—Becky Albertalli, #1 New York Times bestselling author of Simon vs. the Homo Sapiens Agenda and Leah on the Offbeat

Today is going to be an amazing day, and here's why: because you're holding this book. The exact opposite of meh, DEAR EVAN HANSEN is a powerful exploration of grief and depression and the many ways we're present (or not) for those around us without always knowing it.—David Arnold, New York Times bestselling author of Kids of Appetite, Mosquitoland, and The Strange Fascinations of Noah Hypnotik

Yep, the hit musical will make you cry just as much in book form.—Entertainment Weekly

[A] particularly authentic first-person narration about family dynamics, the importance of kindness, and the horrors of not fitting in at high school.... A must-read.—Publishers Weekly