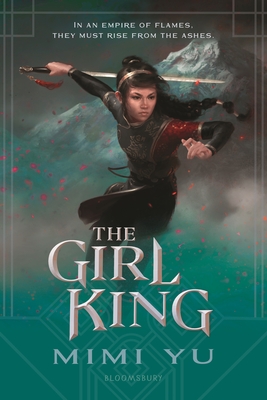 In this dark, sweeping fantasy perfect for fans of Girls of Paper and Fire and Wicked Saints, Princesses Lu and Min find themselves on opposite sides of a war to rule their Empire.

Sisters Lu and Min have always known their places as the princesses of the Empire of the First Flame: assertive Lu will be named her father's heir and become the dynasty's first female ruler, while timid Min will lead a quiet life in Lu's shadow. Until their father names a new heir--their male cousin, Set.

Determined to reclaim her birthright, Lu goes in search of allies, leaving Min to face the volatile court alone. Lu soon crosses paths with Nokhai, the lone, unlikely survivor of the Ashina, a clan of nomadic wolf shapeshifters. Nok never learned to shift--or to trust the empire that killed his family--but working with the princess might be the only way to unlock his true power.

As Lu and Nok form a tenuous alliance, Min's own hidden power awakens, a forbidden, deadly magic that could secure Set's reign . . . or allow her to claim the throne herself. But there can only be one emperor, and the sisters' greatest enemy could very well turn out to be each other.

This sweeping fantasy set against a world of ancient magic and political intrigue weaves an unforgettable story of ambition, betrayal, and sacrifice.

Mimi Yu was born and raised in rural upstate New York. She is an alumna of VONA/Voices. She received a BA in liberal arts from Sarah Lawrence College and an MFA from the New School/Parsons School of Design. She currently resides in Chicagoland with her husband. When she's not writing, she enjoys gardening, quilting, boxing, and fostering kittens. She has five cats, one dog, and four planets in Aquarius.

“A tremendously stunning world with complex characters and a heart-pounding adventure.” —Buzzfeed

“This book has been pulling in the hype--with good reason.” —Paste Magazine

“Everything I want in a high fantasy.” —Samantha Shannon, New York Times bestselling author of THE PRIORY OF THE ORANGE TREE

“This action-packed epic fantasy engrossed me from the first page. Lu is a heroine for the ages!” —Julie C. Dao, author of FOREST OF A THOUSAND LANTERNS

“An intricate, richly crafted fantasy that will draw you in.” —Heidi Heilig, author of FOR A MUSE OF FIRE

“Yu draws the reader in to a new and intriguing fantasy world with fascinating characters and deft storytelling.” —Cindy Pon, author of WANT and SERPENTINE