Synchronicity: The Epic Quest to Understand the Quantum Nature of Cause and Effect (Hardcover) 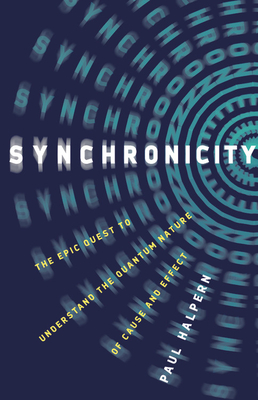 By Paul Halpern
$30.00
On our shelves now. We will confirm availability.

From Aristotle's Physics to quantum teleportation, learn about the scientific pursuit of instantaneous connections in this insightful examination of our world.

For millennia, scientists have puzzled over a simple question: Does the universe have a speed limit? If not, some effects could happen at the same instant as the actions that caused them -- and some effects, ludicrously, might even happen before their causes. By one hundred years ago, it seemed clear that the speed of light was the fastest possible speed. Causality was safe. And then quantum mechanics happened, introducing spooky connections that seemed to circumvent the law of cause and effect. Inspired by the new physics, psychologist Carl Jung and physicist Wolfgang Pauli explored a concept called synchronicity, a weird phenomenon they thought could link events without causes. Synchronicity tells that sprawling tale of insight and creativity, and asks where these ideas -- some plain crazy, and others crazy powerful -- are taking the human story next.

Paul Halpern is a professor of physics at the University of the Sciences in Philadelphia and the author of sixteen popular science books, including The Quantum Labyrinth and Einstein's Dice and Schrödinger's Cat. He is the recipient of a Guggenheim fellowship and is a fellow of the American Physical Society. He lives near Philadelphia, Pennsylvania.

One of the Best of Physics in Books, TV, and Film in 2020
—Physics World

"Synchronicity is an absolutely fascinating read, and Halpern is an excellent writer and researcher."
—Tushna Commissariat, Physics World

"As always, Halpern's writing is engaging and accessible, and he readily identifies inconsistencies and problems still needing solutions. Readers will appreciate his thoughtful approach and his consideration of coincidence, synchronicity, and the mysteries of physics."
—Kathleen McBroom, Booklist

"Halpern is a fun and
engaging writer... Readers who aren't familiar with the stories will likely find
this a fun and eye-opening read."

"Paul Halpern engagingly explores the many kinds of connection in the universe, from cause and effect to coincidence, and on to the weirdness of entanglement. After reading Synchronicity, you'll think twice the next time someone says everything happens for a reason."—Steven Strogatz, author of Infinite Powers

"Writing beautifully, Halpern describes with lucidity and great
verve the whole story of how physics has led us to rethink what
synchronicity means and ultimately to examine what Einstein once called "spooky action at
a distance."

"An elegant and smoothly written account of how fundamental physics has informed our view of the cosmos from ancient times to the present. An engaging and informative blend of the scientific advances and the lives of the people who made them. A great read!"
—IanStewart, author of Do Dice Play God?

"A masterful account
of the developments of fundamental physics over the past century."
—Marcus Chown, author of Solar System

"Synchronicity is a very informative and thought-provoking account of humankind's efforts from antiquity to the present to understand the causal structure of the everyday world and, during the past century, to unite that understanding with the apparently acausal nature of the quantum world of atoms and particles. Paul Halpern writes with remarkable clarity and insight in a very accessible and engaging style."—David C. Cassidy, author of Beyond Uncertainty

"Paul Halpern, a gifted expositor of science, takes the reader on an exciting ride through history, showing how physicists and their antecedent philosophers have sought to understand nature through its connections-through synchronicity."
—Kenneth W. Ford, author of Building the H Bomb

"Paul Halpern has zeroed in on one of the biggest mysteries in physics: objects with no mechanical linkage somehow act in harmony. He gives it a human face by digging into the Pauli-Jung collaboration-there is nothing else quite like it in the history of science."
—George Musser, author of Spooky Action at a Distance

"In this beautifully written page-turner, physicist Paul Halpern reveals as much about the secrets of the universe as he does about his own masterful ability to uncover hidden patterns in the history of ideas. With elegance, clarity, and penetrating insight, Synchronicity takes its readers on a sweeping journey through a dazzling array of intellectual traditions in search of what connects everything around us and beyond. A superb intellectual achievement."—Julien Musolino, author of The Soul Fallacy

"A roller coaster of a ride that covers more than 2,000 years of philosophy and physics, culminating in a fascinating brain-bender of what we have to give up if we want to reconcile ideas like 'cause and effect' with the bizarreness of our fundamental reality. Every possible interpretation, including those of the 20th century's greatest physicists, dissatisfies us in some way. In Halpern's capable hands, our uncertainties about the quantum Universe transform from frustration to wonder as various ideas are at last put to the test, deepening our appreciation of our mysterious quantum Universe."
—Ethan Siegel, author of Beyond the Galaxy

"Synchronicity is a sweeping account of humanity's understanding of the nature of causality. With great virtuosity, Paul Halpern weaves together all of the threads of this important story from the ancient Greeks to modern physics while entertaining the reader with insightful character studies and colorful anecdotes. A delightful book that anyone interested in the history of ideas will enjoy."
—John Kounios, coauthor of The Eureka Factor

"The development of scientific knowledge is often portrayed as some kind of superhighway - as a fast route to complete understanding of the world. This is far from the truth. Real science meanders, it twists and turns, runs this way and then that, and sometimes gets hopelessly lost. Synchronicity takes us on a delightful journey along the pathways of real science, and Halpern is a most genial guide."—Jim Baggott, author of Quantum Reality

"From
what primeval pattern was the fabric of the universe formed? What determined
its warp and its woof? In this wonderfully readable book, which somehow never
skimps on the science, Paul Halpern explores the mystery of causality through
the ever-intriguing collaboration between Wolfgang Pauli and Carl Jung.
Masterfully written, it is at once an inspiring story of how quirks and
creativity drive breakthroughs in science and a cautionary tale of how our
all-too-human desire to seek meaningful patterns can lead even the brightest
minds astray."

"Synchronicity is an extraordinarily accessible and deeply engaging introduction to one of the most provocative issues in physics today: the instantaneous, acausal connections between indefinitely remote entities, exhibited in phenomena such as quantum coherence and entanglement. The ideas Halpern discusses are quite complex, but his flair for crisp and elegant descriptions, delightfully original metaphors, and judicious sprinkling of amusing historical anecdotes, keep the reader both grounded and enthralled. Synchronicity is an insightful, thought-provoking book, and compelling reminder that science does not progress along a purely logical, deterministic path but one that is curved and warped by the passions, predilections, and prejudices of its practitioners.—Tasneem Zehra Husain, author of Only the Longest Threads