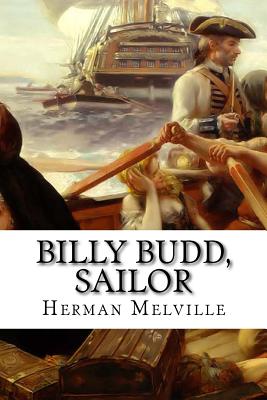 Billy Budd, Sailor is a novella by American writer Herman Melville, first published posthumously in London in 1924. Melville began writing the work in November 1888, but left it unfinished at his death in 1891. It was acclaimed by British critics as a masterpiece when published in London, and quickly took its place among the canon of significant works in the United States. The plot follows Billy Budd, a seaman impressed into service aboard HMS Bellipotent in the year 1797, when the British Royal Navy was reeling from two major mutinies and was threatened by the Revolutionary French Republic's military ambitions. He is impressed from another ship, The Rights of Man (named after the book by Thomas Paine). As his former ship moves off, Budd shouts, "Good-by to you too, old Rights-of-Man." Billy, a foundling, has an openness and natural charisma that makes him popular with the crew. For unexplained reasons, he arouses the antagonism of the ship's Master-at-arms, John Claggart, who falsely accuses Billy of conspiracy to mutiny. When the Captain, the Hon. Edward Fairfax "Starry" Vere, is presented with Claggart's charges, he summons Claggart and Billy to his cabin for a private meeting. Claggart makes his charges and Billy is unable to respond, due to a stutter which grows more severe with intense emotion. He strikes and accidentally kills Claggart.