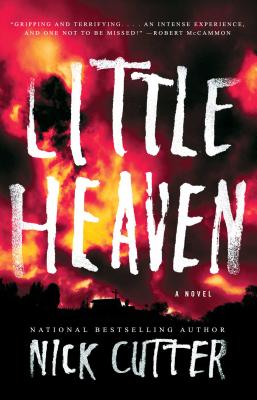 
Not in stock at store. Will, in most instances, ship from our warehouse in 7-10 days
A “gripping and terrifying story…and one not to be missed” (Robert McCammon) from the acclaimed author of The Troop and The Deep!

A trio of mismatched mercenaries—Micah Shughrue, Minerva Atwater, and Ebenzer Elkins, colloquially known as “the Englishman”—is hired by young Ellen Bellhaven for a deceptively simple task: check in on her nephew, who may have been taken against his will to a remote New Mexico backwoods settlement called Little Heaven, where a clandestine religious cult holds sway. But shortly after they arrive, things begin to turn ominous. There are stirrings in the woods and over the treetops—and above all else, the brooding shape of a monolith known as the Black Rock casts its terrible pall. Paranoia and distrust soon grip the settlement. Escape routes are gradually cut off as events spiral toward madness. Hell—or the closest thing to it—invades Little Heaven. All present here are now forced to take a stand and fight back, but whatever has cast its dark eye on Little Heaven is marshaling its power—and it wants them all…

“A sprawling epic that can stand alongside the best of ‘80s King, Barker, and McCammon. Fun, nasty, smart, and scary, and in all the right places.” —Paul Tremblay, acclaimed author of A Head Full of Ghosts and Disappearance at Devil’s Rock
Nick Cutter is the author of the critically acclaimed national bestseller The Troop (which is currently being developed for film with producer James Wan), as well as The Deep and Little Heaven. Nick Cutter is the pseudonym for Craig Davidson, whose much-lauded literary fiction includes Rust and Bone, The Saturday Night Ghost Club, and, most recently, the short story collection Cascade. His story “Medium Tough” was selected by author Jennifer Egan for The Best American Short Stories 2014. He lives in Toronto, Canada.