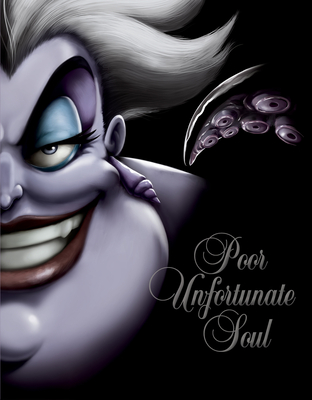 This is book number 3 in the Villains series.

The tale of the sea king's daughter Ariel is a beloved one of losing—and then finding—one's own voice.
The story has been told many times and in many ways. But always the mergirl wants more than her world can offer, and her father demands that she live within the confines of his domain. Her rebelliousness costs the little mermaid her voice and nearly her soul. But the power of good prevails, and Ariel emerges proud and unchanged.
And yet this is only half the story. So what of Ariel's nemesis, Ursula, the sea witch? What led to her becoming so twisted, scorned, and filled with hatred? Many tales have tried to explain her motives. Here is one account of what might have shaped the sea witch into a detestable and poor unfortunate soul.
Enjoy Serena Valentino's entire Villain's series
Serena Valentino has been weaving tales that combine mythos and guile for the past decade. She has earned critical acclaim in both the comic and horror domains, where she is known for her unique style of storytelling, bringing her readers into exquisitely frightening worlds filled with terror, beauty, and extraordinary protagonists. The books in her best-selling Villains series are best enjoyed when read in the following order: Fairest of All, The Beast Within, Poor Unfortunate Soul, Mistress of All Evil.