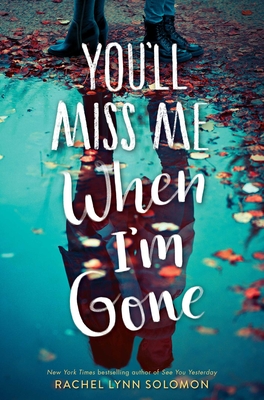 
May be on Backorder or may be Out of Print. May take a number of weeks to arrive if it arrives at all. We will confirm.
“Heartfelt, deeply moving.” —Buzzfeed
“Dark and thought-provoking.” —Publishers Weekly
“A stunning debut.” —VOYA

A poignant, lyrical debut novel about twins who navigate first love, their Jewish identity, and shocking results from a genetic test that determines their fate—whether they inherited their mother’s Huntington’s disease.

Eighteen-year-old twins Adina and Tovah have little in common besides their ambitious nature. Viola prodigy Adina yearns to become a soloist—and to convince her music teacher he wants her the way she wants him. Overachiever Tovah awaits her acceptance to Johns Hopkins, the first step on her path toward med school and a career as a surgeon.

But one thing could wreck their carefully planned futures: a genetic test for Huntington’s, a rare degenerative disease that slowly steals control of the body and mind. It’s turned their Israeli mother into a near stranger and fractured the sisters’ own bond in ways they’ll never admit. While Tovah finds comfort in their Jewish religion, Adina rebels against its rules.

When the results come in, one twin tests negative for Huntington’s. The other tests positive.

These opposite outcomes push them farther apart as they wrestle with guilt, betrayal, and the unexpected thrill of first love. How can they repair their relationship, and is it even worth saving?

From debut author Rachel Lynn Solomon comes a luminous, heartbreaking tale of life, death, and the fragile bond between sisters.
Rachel Lynn Solomon is a bestselling author of love stories for teens and adults, including Today Tonight Tomorrow, See You Yesterday, The Ex Talk, and Weather Girl. Originally from Seattle, she’s currently navigating expat life with her husband in Amsterdam, where she’s on a mission to try as many Dutch sweets as possible. Learn more at RachelSolomonBooks.com.

“Solomon has created two distinct voices for Adina and Tovah. Neither girl is perfect, but both are realistically drawn as young women on the cusp of adulthood struggling with grief, guilt, and anxiety while trying to figure out their place in the world.” —School Library Journal

“A well-executed, somber study of the devastating impact of incurable disease on a family.” —Booklist

“Compelling . . . readers will appreciate this story of heartbreak and, ultimately, family resilience.” —BCCB

“This story unfolds as twin sisters search for common ground while navigating the complexities of life, love, and the devastating realization that their fates are already sealed. I cried knowing that each twin would suffer immeasurable loss, yet only one would succumb.” —Stacey Haerr, Warwick’s (La Jolla, CA)

“An honest and heartwarming story about luck, love, and what it means to trust your fate.” —Kim Bissell, Broadway Books (Portland, OR)