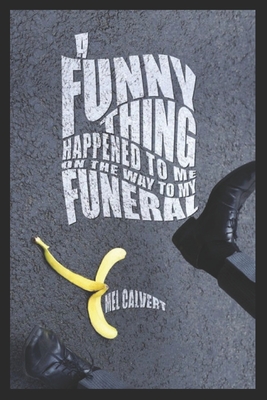 
Not in stock at store. Will, in most instances, ship from our warehouse in 7-10 days
This is Mel Calvert's second book. His first one "How I Quit Smoking and Lived To Tell About It" is currently available on Amazon.com and in Kindle Books.
This one, written in the same lighthearted and humorous style as his first, is a gathering of jokes, stories, quips and anecdotes from his fifty-plus years in the world of show business. As a comedian, he worked his first gig in Las Vegas at the Fremont Hotel on the same stage with a nineteen year-old kid named Wayne Newton. This hilarious story is told in detail along with other equally humorous tales from his appearances in Vegas.
From Las Vegas he takes us on tour with him and his beautiful partner and wife of over forty years to many exotic foreign ports around the world with stories from each of them guaranteed to lighten your day and make you glad for your time spent.
If you have a sense of humor, you will definitely enjoy "A Funny Thing Happened To Me On The Way To My Funeral" by up-and-coming new author, Mel Calvert.
Mel Calvert was born in Cincinnati, Ohio in 1930. His father, Kenneth Calvert, worked for his father, Elbern Frederick Calvert at one of Ohio's first Ford Dealer's, Calvert Motors, in Harrison, Ohio. His mother, Mary Ruth Calvert, was graduated from Nursing School at Cincinnati's Bethesda Hospital, from which she retired as Head Nurse in the late fifties. Mel entered the United States Army Airborne during the Korean conflict as a Private, rose in rank, was commissioned a Second Lieutenant serving as an Infantry Communications Officer and received an Honorable Discharge in 1953. After a long career in show business as a musician, comedian and magician, Mel has found his forte as an author and was recently published in the Aircraft Owners and Pilots Association's (AOPA) Pilot Magazine. Watch for more offerings from his pen on Amazon.com.