The Sense of Brown (Perverse Modernities: A Series Edited by Jack Halberstam and) (Paperback) 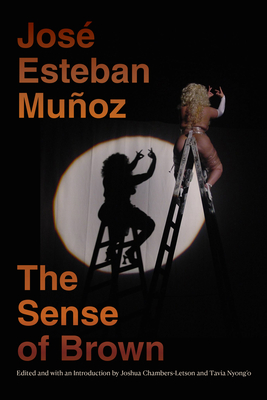 The Sense of Brown (Perverse Modernities: A Series Edited by Jack Halberstam and) (Paperback)


Not in stock at store. Will, in most instances, ship from our warehouse in 7-10 days
The Sense of Brown is Jos Esteban Mu oz's treatise on brownness and being as well as his most direct address to queer Latinx studies. In this book, which he was completing at the time of his death, Mu oz examines the work of playwrights Ricardo Bracho and Nilo Cruz, artists Nao Bustamante, Isaac Julien, and Tania Bruguera, and singer Jos Feliciano, among others, arguing for a sense of brownness that is not fixed within the racial and national contours of Latinidad. This sense of brown is not about the individualized brown subject; rather, it demonstrates that for brown peoples, being exists within what Mu oz calls the brown commons-a lifeworld, queer ecology, and form of collectivity. In analyzing minoritarian affect, ethnicity as a structure of feeling, and brown feelings as they emerge in, through, and beside art and performance, Mu oz illustrates how the sense of brown serves as the basis for other ways of knowing and being in the world.