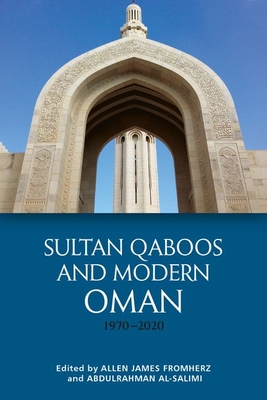 One of the first, timely accounts of both the modern Omani rebirth and its legacy over the entire reign of Sultan Qaboos (1970-2020). The book provides unique, wide-ranging interdisciplinary and international perspectives on modern Oman by specialists in a variety of fields from Oman, Europe and North America. Utilising a range of perspectives, all chapters connect to the theme of rebirth, of the connections between the past and the future pursued by Sultan Qaboos and his government in fields as diverse as health, religion, law, economy, heritage and diplomacy. Not overlooking the many challenges faced during Sultan Qaboos' reign and still faced by Oman, the book engages various theories and perspectives about Oman's economic, religious, educational and cultural transformations under Qaboos (d. 2020 CE).

Allen Fromherz is Professor of History at Georgia State University and director of the Middle East Studies Center. He graduated Summa Cum Laude from Dartmouth College in 2002 and received his PhD from St. Andrews University in Scotland in Medieval Islamic History in 2006. Dr. Fromherz has held several international fellowships including Fulbright, Gerda Henkel Stiftung, the Sultan Qaboos Cultural Center. He was a senior fellow in the humanities at NYU Abu Dhabi (2016). He has lived in various parts of the Gulf, including Oman, United Arab Emirates and Qatar. He is President of the American Institute for Maghrib Studies (AIMS). His publications include: Ibn Khaldun (Edinburgh University Press, 2010); The Almohads (IB Tauris, 2012); Qatar (Georgetown Univeristy Press, 2016) and The Near West (Edinburgh University Press, 2016). Abdulrahman al-Salimi is an Omani scholar.