Patient H69: The Story of My Second Sight (Paperback) 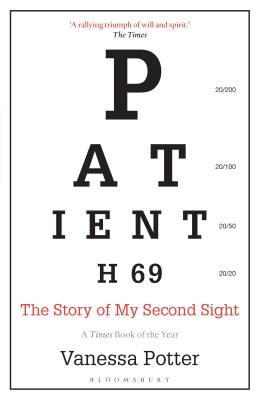 By Vanessa Potter
Out of Print

Imagine waking up, suddenly blind and paralyzed! It happened to “patient h69” in this gripping story of one women's quest to understand her unique neurological illness and recover from it.

In 2012, Vanessa Potter, a married advertising film producer with two young children, was stricken by Neuromyelitis Optica Spectrum Disorder (NMOSD), a rare illness that resulted in sudden blindness and paralysis. Over the next five months, she regained mobility, but recovering her sight was more problematic. At first what she saw was monochromatic. As color reappeared, she encountered synesthesia (experiencing odd responses to stimuli, such as hearing inanimate objects talk to her). While a team of neurobiologists, psychologists, immunologists, and developmental biologists treated her, she blogged and kept audio-diaries, using the pen-name Patient H69.

In her own words, Vanessa reveals the terror and torment of her blindness. Supported by neuroscientists and Britain's National Health Service, Vanessa became a science sleuth, uncovering some of the innermost functions of the brain and our complex visual system, while learning meditation and self-hypnosis to help herself endure the ordeal and make a miraculous recovery.

Her case offered scientists an important, and previously inaccessible, window into the process of early visual development, as her own optic nerves self-repaired and her brain went into overdrive. Patient H69 is a gripping human story, made all the more real by the unique response of one patient and the science she uncovers.

Vanessa Potter was an award-winning broadcast producer in the London advertising industry before falling ill with a mysterious neurologic illness. After recovering her sight and mobility, she collaborated with Dr. Tristan Bekinschtein to launch an interactive EEG experience called The Beach that allows people to see and hear their own meditative brainwaves. The project debuted at the Cambridge Science Festival in March 2016. This is her first book and she lives in London, England.

“Potter's work records an indomitable spirit that righted a world that had turned upside down.” —Publishers Weekly

“. . . an enthralling personal chronicle . . . A compelling firsthand medical account--it's as if an Oliver Sachs patient were to tell her own story--sure to appeal to memoir fans as well as those interested in the science of the brain.” —Library Journal

“Patient H69 is more than a memoir. It is a journey toward understanding the brain told through the harrowing story of an intensely curious woman with the foresight to track her progress, and the compassion to use her experience to help others.” —Booklist