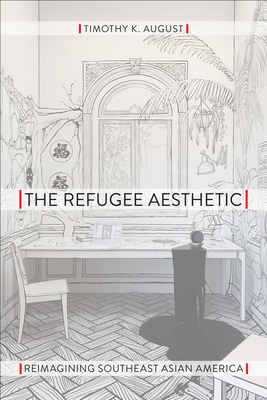 The refugee is conventionally considered a powerless figure, eagerly cast aside by both migrant and host communities. In his book, The Refugee Aesthetic, Timothy August investigates how and why a number of Southeast Asian American artists and writers have recently embraced the figure of the refugee as a particularly transformative position. He explains how these artists, theorists, critics, and culture-makers reconstruct their place in the American imagination by identifying and critiquing the underlying structures of power that create refugees in the contemporary world.

August looks at the outside forces that shape refugee representation and how these expressions are received. He considers the visual legacy of the Southeast Asian refugee experience by analyzing music videos, graphic novels, and refugee artwork. August also examines the power of refugee literature, showing how and why Southeast Asian American writers look to the refugee position to disentangle their complicated aesthetic legacy.

Arguing that “aesthetics” should be central to the conceptualization of critical refugee studies, August shows how representational structures can galvanize or marginalize refugees, depending on how refugee aesthetics are used and circulated.


Timothy K. August is an Assistant Professor of English at Stony Brook University.