The Great Pretender: The Undercover Mission That Changed Our Understanding of Madness (Large Print / Library Binding) 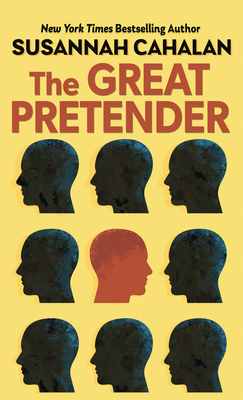 “Susannah Cahalan, the bestselling author of Brain on Fire, is back with another riveting true story of madness and the mental health system. In the 1970s, Dr. David Rosenhan convinced seven sane people to join him in committing themselves to mental hospitals as patients and trying to get out on their own. What begins as an inspiring and daring story of experimentation darkens and twists as Cahalan closes in on a story shrouded in mystery—who were these seven ‘pseudopatients’ in Rosenhan’s groundbreaking study, and what really happened to them? The Great Pretender is not-to-be-missed narrative nonfiction.”
— Megan Bell, Underground Books, Carrollton, GA

"One of America's most courageous young journalists" and the author of the #1 New York Times bestselling memoir Brain on Fire investigates the shocking mystery behind the dramatic experiment that revolutionized modern medicine (NPR). Doctors have struggled for centuries to define insanity--how do you diagnose it, how do you treat it, how do you even know what it is? In search of an answer, in the 1970s a Stanford psychologist named David Rosenhan and seven other people--sane, healthy, well-adjusted members of society--went undercover into asylums around America to test the legitimacy of psychiatry's labels. Forced to remain inside until they'd "proven" themselves sane, all eight emerged with alarming diagnoses and even more troubling stories of their treatment. Rosenhan's watershed study broke open the field of psychiatry, closing down institutions and changing mental health diagnosis forever. But, as Cahalan's explosive new research shows in this real-life detective story, very little in this saga is exactly as it seems. What really happened behind those closed asylum doors?

Susannah Cahalan is the award-winning, New York Times bestselling author of Brain on Fire My Month of Madness, a memoir about her struggle with a rare autoimmune disease of the brain. She writes for the New York Post. Her work has also been featured in the New York Times, Scientific American Magazine, Glamour, Psychology Today, and other publications. She lives in Brooklyn.