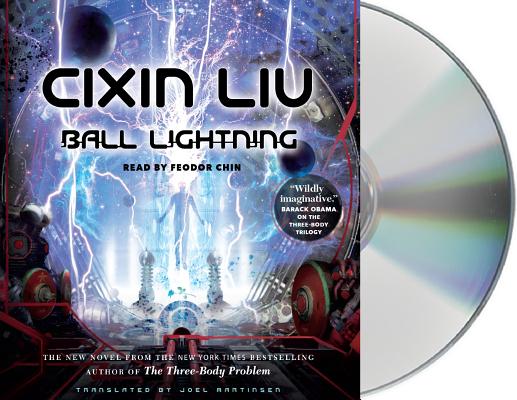 By Cixin Liu, Joel Martinsen (Translated by), Feodor Chin (Read by)
$50.99
Special Order, May be Out of Print

A new standalone military science fiction adventure from the New York Times bestselling and award-winning author of the Three-Body Trilogy.

This program is read by Feodor Chin, voice of Zenyatta in Overwatch.

When Chen’s parents are incinerated before his eyes by a blast of ball lightning, he devotes his life to cracking the secret of mysterious natural phenomenon. His search takes him to stormy mountaintops, an experimental military weapons lab, and an old Soviet science station.

The more he learns, the more he comes to realize that ball lightning is just the tip of an entirely new frontier in particle physics. Although Chen’s quest provides a purpose for his lonely life, his reasons for chasing his elusive quarry come into conflict with soldiers and scientists who have motives of their own: a beautiful army major with an obsession with dangerous weaponry, and a physicist who has no place for ethical considerations in his single-minded pursuit of knowledge.

Ball Lightning, by award-winning Chinese science fiction author Cixin Liu, is a fast-paced audiobook about what happens when the beauty of scientific inquiry runs up against a push to harness new discoveries with no consideration of their possible consequences.

CIXIN LIU is the most prolific and popular science fiction writer in the People’s Republic of China. Liu is an eight-time winner of the Galaxy Award (the Chinese Hugo) and a winner of the Chinese Nebula Award. Prior to becoming a writer, he worked as an engineer in a power plant. His novels include The Three-Body Problem, The Dark Forest, and Death's End.

Joel Martinsen is research director for a media intelligence company. His translations have appeared in Words Without Borders, Chutzpah!, and Pathlight. He lives in Beijing.

Praise for The Three-Body Trilogy

"The Three-Body epic concludes with sweep and scope and majesty, worthy of Frederik Pohl or Poul Anderson, Scholar Wu or H. G. Wells. The universe is likely to be a rough neighborhood. See just how rough...and how life might still prevail." —David Brin on Death's End

“If you thought The Three-Body Problem and The Dark Forest were expansive, they're nothing compared to Death's End.... A testament to just how far [Liu's] own towering imagination has taken him: Far beyond the borders of his country, and forever into the canon of science fiction.” —NPR on Death’s End

“Compelling reading...the most mind-bending of them all.... Liu’s picture of humanity’s place in the cosmos is among the biggest, boldest and most disturbing we’ve seen.” —The Los Angeles Times

Liu Cixin's writing evokes the thrill of exploration and the beauty of scale.... Extraordinary. —The New Yorker

[Cixin h]as gained a following beyond the small but flourishing science-fiction world here [and] breathed new life into a genre . . . The "Three-Body" tomes chronicle a march of the human race into the universe set against the recent past, the tumultuous years of the Cultural Revolution. It is a classic science-fiction story in the style of the British master Arthur C. Clarke. —The New York Times

“A breakthrough book . . ., a unique blend of scientific and philosophical speculation, politics and history, conspiracy theory and cosmology.” —George R. R. Martin on The Three-Body Problem

The Three-Body Problem deserves all of its plaudits. It's an exceptional novel, and Ken Liu's translation is both smooth and unintrusive. —Mike Resnick, multiple Hugo Award winner

"Ken Liu's excellent translation combines fluid clarity with a continuous view into Chinese worldviews, adding to the fun and making this the best kind of science fiction, familiar but strange all at the same time.I hope we'll get to read more by Cixin Liu, and for now applaud this great entry." —Kim Stanley Robinson on The Three Body Problem

Cixin Liu brings to the reader a deep and insightful vision of China past and future. First-rate work by a powerful new voice. —Ben Bova, multiple Hugo Award winner, on The Three Body Problem