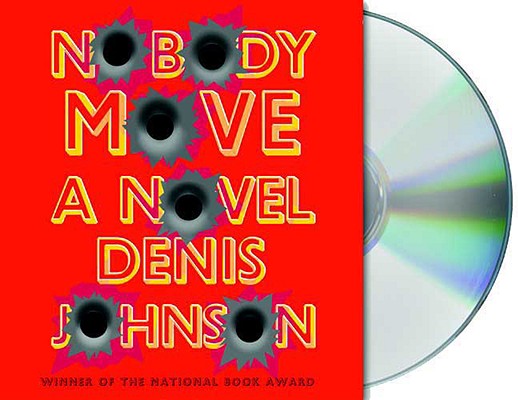 By Denis Johnson, Will Patton (Read by)
$24.95
Special Order, May be Out of Print

From the National Book Award–winning, bestselling author of Tree of Smoke comes a provocative thriller set in the American West.  Nobody Move, which first appeared in the pages of Playboy, is the story of an assortment of lowlifes in Bakersfield, California, and their cat-and-mouse game over $2.3 million. Touched by echoes of Raymond Chandler and Dashiell Hammett, Nobody Move is at once an homage to and a variation on literary form. It salutes one of our most enduring and popular genres—the American crime novel—but does so with a grisly humor and outrageousness that are Denis Johnson’s own. Sexy, suspenseful, and above all entertaining, Nobody Move shows one of our greatest novelists at his versatile best.

Denis Johnson is the author of six novels, a collection of poetry, and one book of reportage. His novel "Tree of Smoke "was the 2007 winner of the National Book Award. He lives in northern Idaho.

"Will Patton delivers a flawless reading of Johnson's novel of life on the lam.... He embodies each character with absolute authority... [a] virtuosic performance."--Publishers Weekly "Will Patton's narration is so true to the mood, so evocative, that you'll feel like you've smoked a pack of Camels and swallowed a fifth of cheap vodka by the time it's all over." --BookPage "Will Patton gives real character to all the players, especially the protagonist, a gambling addicted singer in a barbershop choir named Johnny Lutz...A contemporary crime-noir masterpiece. Patton and Johnson make it all seem brand-new." -- AudioFile "Patton's reading of Denis Johnson's noir novel Nobody Move is on my list of best audiobooks of 2009."—St. Petersburg Times "...A superb audio performance in a book that lingers on the edge of your consciousness." - The Wintston-Salem Journal